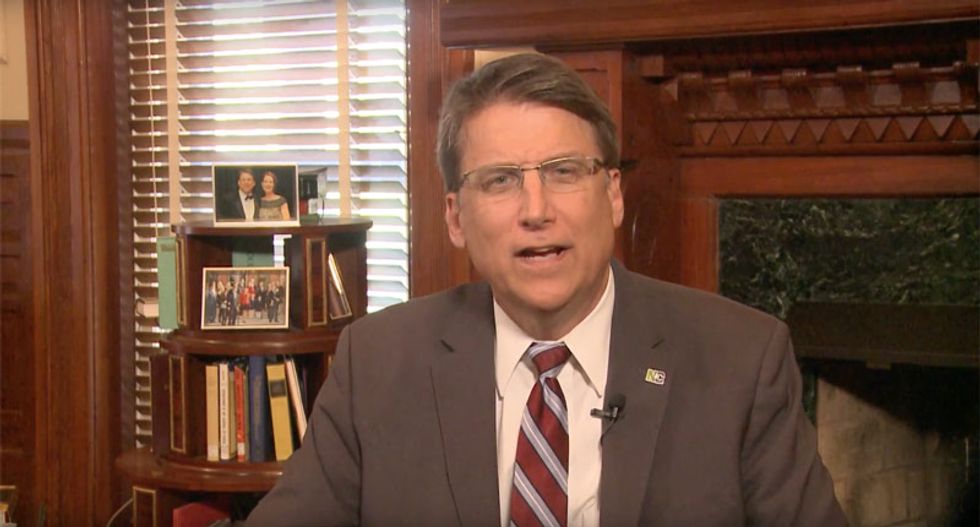 North Carolina's new law cancelling out local protections for the LGBT community, passed quickly by the Republican legislature and governor after the city of Charlotte had enacted an ordinance to allow transgender people to use public bathrooms matching their gender identities, has now set off a wave of political attacks and counter-attacks — some interesting examples of resistance.

But one thing seems clear right now: This law is likely to be a defining topic of politics in North Carolina for 2016.

On Tuesday, state Attorney General Roy Cooper — who is also the Democratic nominee against Republican Gov. Pat McCrory in this year's gubernatorial election — declared that he could not defend the law in court. "Not only is this new law a national embarrassment, it will set North Carolina’s economy back if we don’t repeal it,” he said at a news conference.

In response, McCrory posted a video message Tuesday night, the tone of which makes very clear that this could be the defining issue of this year's gubernatorial election, with nearly every line intended to slam Cooper and to defend the honor of North Carolina's bathrooms.

"Some have called our state an embarrassment. The real embarrassment is politicians not publicly respecting each other’s positions on complex issues," McCrory declared. “Unfortunately, that has occurred when legislation was passed to protect men women and children when they use a public restroom, shower or locker-room. That is an expectation of privacy that must be honored and respected."

And he cast blame on people from outside the state, as being the ones who have really made this into a controversy — along with certain people within the state, such as Cooper.

"Instead, North Carolina has been the target of a vicious, nation-wide smear campaign. Disregarding the facts, other politicians, from the White House to mayors and city council members and yes our Attorney General, have initiated and promoted conflict to advance their political agenda. Even if it means defying the constitution and their oath of office."

And of Cooper specifically, he said: "Now I’m standing up to the Attorney General of North Carolina who today refused to fulfill his oath of office to defend the people of North Carolina in a lawsuit filed over the privacy of our restrooms."

The new law has set off waves of protest, including this demonstration of a thousand people Tuesday evening in Chapel Hill.

At the same time, a campaign of opposition has emerged in interesting places — from local businesses. A former North Carolina native now living in Boston, Emily Waggoner, has set up a Google map called "Safe Bathrooms," for businesses to register their support of transgender customers and their opposition to the new law.

“Personally, my partner and I both were saddened and devastated,” Waggoner told the local Fox affiliate in Greensboro. “But that quickly turned to hopeful and joyful once we started to get flooded with requests from businesses to get added to the map.”

A bookstore in Greensboro has also come up with a creative protest: Put up a sign declaring "restroom access denied" for the area's state legislators who voted for the law:

The only thing we discriminate against is bad poetry.

Scuppernog Books owner Brian Lampkin told the local Time Warner Cable News station has a unisex bathrooms, and they've never had any problems — and the store also posted this fun little video to advertise the point.

Because really, which bathroom is a sock-puppet with a face decorated onto it supposed to use, anyway?