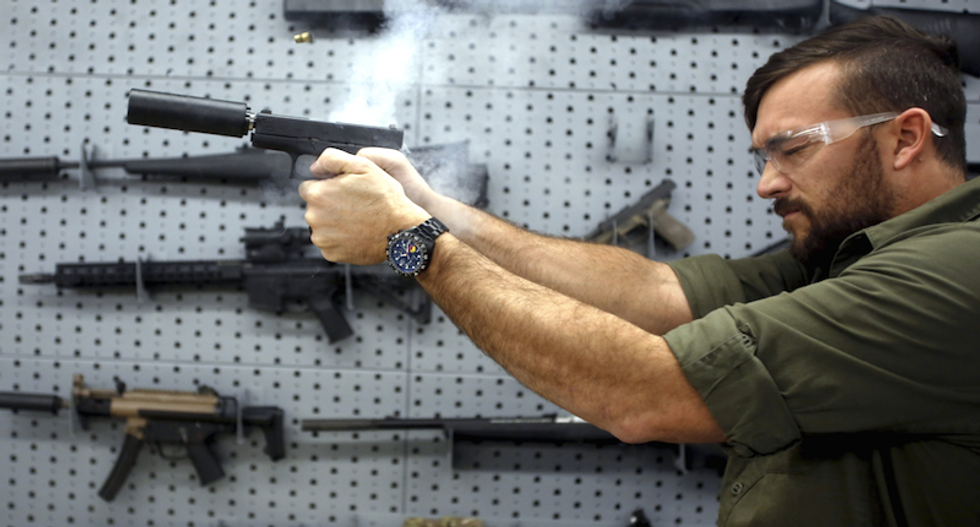 SilencerCo CEO Joshua Waldron fires a handgun with a suppressor in West Valley City, Utah February 23, 2016. Gun silencers or suppressors, the accessory of Hollywood hit men, are becoming increasingly popular in the real world as hunters and other gun owners adopt them for hearing protection. (REUTERS/Jim Urquhart)

The U.S. gun industry is trying to shake off the Hollywood hitman image of the gun silencer and rebrand it as a hearing-protection device in a campaign to roll back regulations that date to the 1930s.

Industry lobbying has led to more than a dozen states legalizing silencers for hunting since 2011. Now gun advocates are pressing Congress to repeal a Depression-era law that requires a months-long screening process for silencer buyers -- far more scrutiny than gun buyers face.

Sales of silencers -- or "suppressors," as the industry prefers to call them -- are booming. The number of silencers registered with the U.S. government more than doubled to 792,282 in February 2015 from 360,534 in March 2012, according to the U.S. Bureau of Alcohol, Tobacco, Firearms and Explosives (ATF).

Check out this graphic showing the silencer sales boom.

Despite their name, silencers can only quiet a gunshot to the level of a jackhammer -- not much use for James Bond-style hit jobs.

Silencers are rarely used in crimes, according to a 10-year study published in 2007 by the Western Criminology Review. Researchers estimated silencers were involved in 30 to 40 of the 75,000 federal criminal cases filed each year. The study found only two federal cases involving a silencer used in murders.

Arizona Republican Representative Matt Salmon said silencers could allow soldiers and hunters to avoid the kind of hearing damage that has forced him to wear a hearing aid after 50 years of shooting guns.

"If we have something that mitigates that kind of hearing loss, we ought to be encouraging it," Salmon said.

In October, he introduced legislation that would replace the silencer screening process with a simpler background check.

The lobbying push alarms some legislators and game wardens who believe quieter guns could make it harder to catch criminals and poachers.

"What legitimate reason does a person have to be wandering around the streets of a big city with a silencer?" said Joe Mullery, a Democrat who represents a high-crime Minneapolis district in the Minnesota state legislature.

Silencers have been tightly regulated since 1934, when Congress restricted access to machine guns, sawed-off shotguns and other weapons used by gangs.

Those wishing to buy a silencer must pay a $200 fee - the equivalent of $3,500 at the time the law was passed - submit fingerprints and a photograph, and secure the approval of their local police chief. Approval by ATF typically takes four to nine months.

Despite these hurdles, silencers have grown in popularity. Inflation has eroded the price of a permit. And a new generation of manufacturers has developed lighter and more affordable products. Prices range from about $200 to nearly $2,000.

Penalties for misuse are steep. People found guilty of using a silencer in a violent crime under federal law face a minimum of 30 years in prison.

Despite their new popularity, silencers don't appear to be turning up much on the streets. Police in Philadelphia and Richmond, Virginia, two high-crime cities in the eastern U.S., haven't encountered silencers at crime scenes or during investigations, according to spokespeople for the departments.

Silencers were used by a former Los Angeles police officer in a 2013 killing spree, according to the Police Foundation – one reason the law-enforcement research group wants to keep restrictions in place.

Industry officials point out that silencer-equipped handguns are difficult to conceal, reducing their appeal for criminals. That could change: one manufacturer, SilencerCo, is developing a handgun with built-in noise reduction that it sees as a future mainstay of the industry.

"We want someone to walk into a store to buy a firearm and say, 'I could choose the loud one or the quiet one'," said SilencerCo chief executive Joshua Waldron.

On a recent Saturday at the National Rifle Association's headquarters outside Washington, D.C., Knox Williams screwed a black canister on the end of a Remington hunting rifle and sighted a target 60 feet (18 meters) away.

When he pulled the trigger, the resulting crack was still loud enough to require all those nearby to wear ear protection. But it lacked the chest-thumping force of a conventional shot.

As head of the American Suppressor Association, an industry lobbying group, Williams spends much of his time demonstrating that silencers aren't silent.

They can help muffle the sound of a bullet leaving the barrel of a gun, but they can't do anything about the "crack" of a bullet breaking the sound barrier.

"These things aren't what gun control advocates think they are," he said.

His group, founded in 2011, has helped to persuade 16 states to legalize hunting with silencers and 13 states to pass laws preventing local police chiefs from blocking silencer applications. He's now targeting 12 states that either outlaw silencer ownership entirely or prohibit it for hunting.

Many silencer-friendly laws have passed by wide margins, sometimes over the objections of law enforcement officials.

In Augusta, Maine, police chief Robert Gregoire said silencer-equipped gunshots may sound further away than a typical gunshot, making it hard to track hunters in unauthorized areas. Also, he now cannot block silencer sales for residents he suspects may not use them responsibly.

A hunter himself, Gregoire said he saw little reason to encourage silencer use.

In Congress, Salmon's Hearing Protection Act has attracted 51 co-sponsors and support by the NRA and other industry groups.

But it's unclear whether it will advance. Salmon has announced he will retire at the end of the year, and Congress is unlikely to pass controversial legislation ahead of November general elections.

In July, the Obama administration will make it more difficult to buy silencers through a legal trust, a method of purchase that allowed one person to share the device. The rules will require people listed on the trust to submit fingerprints and photographs.

That has only goosed sales further. The Silencer Shop, an online retailer, says it is now selling 6,000 units per month, double its usual figure.

"Once you shoot with a suppressor," said owner Dave Matheny, "you end up getting one for every gun you own."