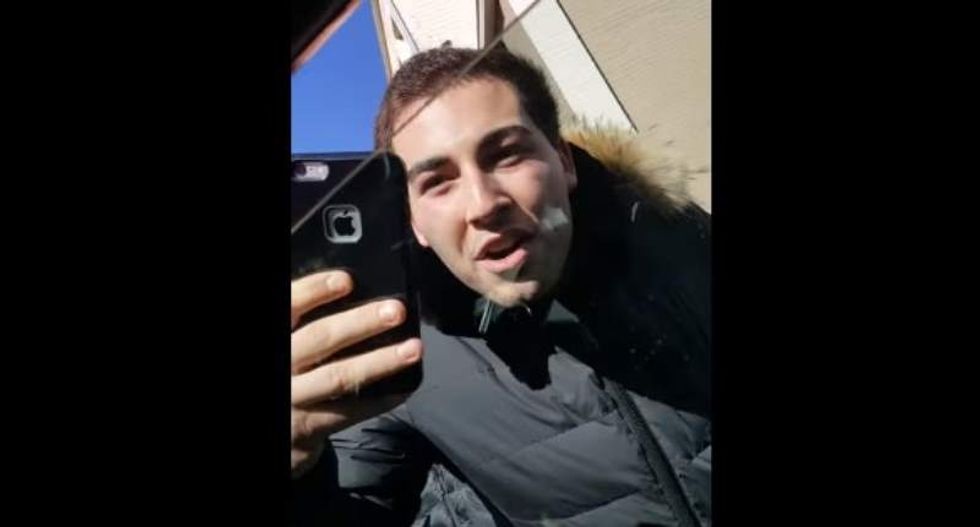 University of Michigan student Jake Croman rants against an Uber driver after his ride was cancelled. (YouTube)

The son of a millionaire landlord in New York City is now under investigation by both the University of Michigan and his fraternity after his homophobic rant against an Uber driver was posted online, Heavy.com reported.

The footage shows Jake Croman berating the driver, identified as Artur Zawada, after Zawada cancels Croman's request for a ride in Ann Arbor. It begins with Croman asking Zawada why he canceled the request "again," before boasting that while "there's 50 of you, there's one of me who spends the most money here, you little f*ck."

"F*ck you, Arthur, you little f*ggot f*ck," Croman rants. "You wanna kick me off? Kick me off, you little piece of sh*t. You’re an Uber driver. Go f*cking drive, you little f*ck. Minimum wage f*ggot, go f*ck yourself."

According to MLive.com, Zawada said that Croman and his friends -- possibly fellow members of the Tau Kappa Epsilon fraternity -- have been harassing him, with Croman going so far as to use other peoples's accounts to contact him.

"He had option to cancel to avoid any issues but he/they proceeded to abuse, [harass], belittle and provoke like kindergarten thugs," Zawada said in a comment posted with the video, which has garnered more than 330,000 views since being posted on March 23.

Tau Kappa Epsilon's leadership released a statement saying it was investigating the incident.

"At the conclusion of our swift, thorough investigation, we will handle the situation with appropriate action," the group read. "Depending on the details of the investigation, this could include the expulsion of membership."

University president Rick Fitzgerald called Croman's actions "reprehensible" in his own statement, adding that the Dean of Students' office had met with not only Croman and Zawada, but the students seen behind Croman in the video, who laughed upon hearing Croman's abusive comments. The university will take action, he said, pending the results of a police inquiry into the incident.

The New York Daily News reported that Croman accused Zawada of religious bias in a statement, saying that his rant was instigated by "a number of offensive anti-Semitic remarks" on the part of the driver.

"This video shows one side of an argument I had with an Uber driver two weeks ago after he refused to pick me up on the basis of my religion," Croman said in his statement. "I am not proud of my reaction to his discrimination and I regret my choice of words."

Croman's father, Steven Croman, has been under investigation in New York since 2014 for allegedly using illegal tactics to force tenants out of rent-controlled apartments on his properties. According to Crains New York, Croman has been fined more than $1 million by the city for violating building and construction codes.