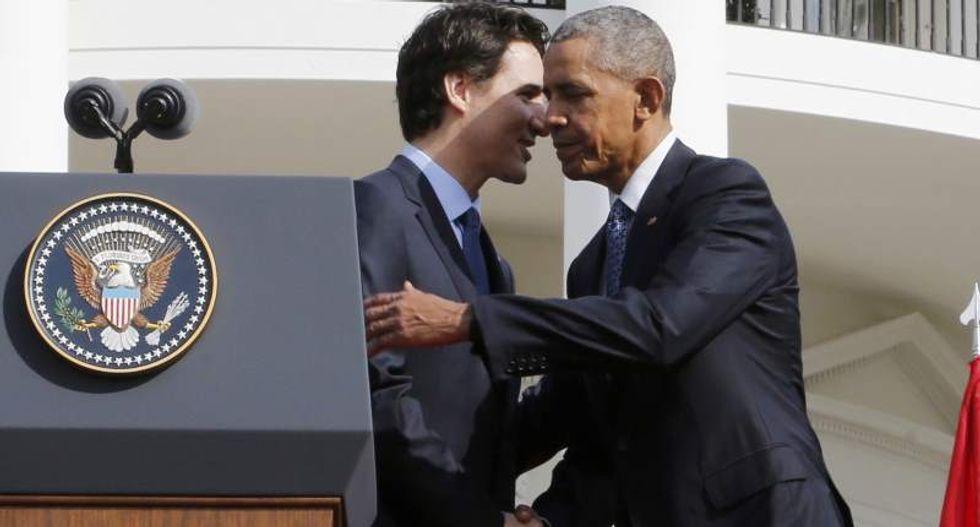 The neighboring countries are traditionally close but relations had soured under former prime minister Stephen Harper, who hectored the White House in a failed bid to push through U.S. approval for the Keystone XL oil pipeline.

The countries committed to cutting emissions of methane by 40 to 45 percent below 2012 levels by 2025, to take steps to fight climate change in the Arctic, and to speed development of green technologies.

They also told officials to look for solutions to a lengthy dispute over exports of Canadian softwood lumber, as well as promising to make it easier for goods and people to cross the long shared border.

"I am grateful that I have him as a partner ... When it comes to the central challenges that we face, our two nations are more closely aligned than ever," Obama told a news conference after talks with Trudeau.

"The President and I agree on many things including, of paramount importance, the direction we want to take our countries in to ensure a clean and prosperous future," said Trudeau.

In another sign of friendlier bilateral ties, Trudeau invited Obama to address the Canadian Parliament this year.

His visit will be capped by a state dinner on Thursday but that could be overshadowed by the race to succeed Obama in November's presidential election. Candidates for the Republican nomination will hold a debate on Thursday night.

Trudeau declined to say what he would do in case the next president was Donald Trump, who has mused about tearing up the North American Free Trade Agreement.

"The friendship between our two countries goes far beyond any two individuals or any ideologies," he said.

"I have tremendous confidence in the American people, and look forward to working with whomever they choose to send to this White House later this year."