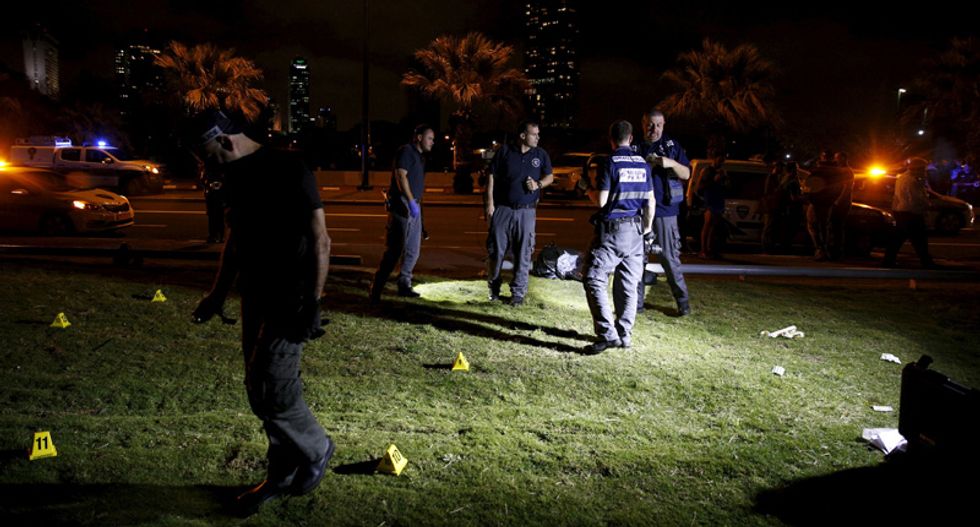 Israeli police search the spot where, according to Israeli police spokesperson, at least 10 Israelis were stabbed, in the popular Jaffa port area of Tel Aviv, Israel March 8, 2016. REUTERS/Amir Cohen

An American tourist was stabbed to death and at least nine other people were wounded by a Palestinian armed with a knife on a popular boardwalk in Tel Aviv on Tuesday, authorities said, while U.S. Vice President Joe Biden was in a meeting a few kilometers away.

The attack took place in the popular Jaffa port area, which is a favorite spot among tourists. The Magen David Adom ambulance service said four of the wounded had severe injuries.

"A terrorist, an illegal resident who came from somewhere in the Palestinian territories, came here to Jaffa and embarked on a run ... along the boardwalk. On his way he indiscriminately stabbed people," Tel Aviv mayor Ron Huldai told Army Radio.

He said a police officer had eventually caught up with the attacker and shot him dead.

Biden arrived in Israel late on Tuesday for a two-day visit, and was meeting former Israeli president Shimon Peres in Jaffa around the time of the stabbings.

In the Tel Aviv suburb of Petah Tikva, a Palestinian entered a store and stabbed an Israeli. The injured man and the store owner together overpowered the attacker and fought him off using the same knife. The attacker died of his wounds, a police spokesman said.

Since October, Palestinian stabbings, shootings and car rammings have killed 28 Israelis and two Americans. Israeli forces have killed at least 177 Palestinians, 119 of whom Israel says were assailants. Most others were shot dead during violent protests.