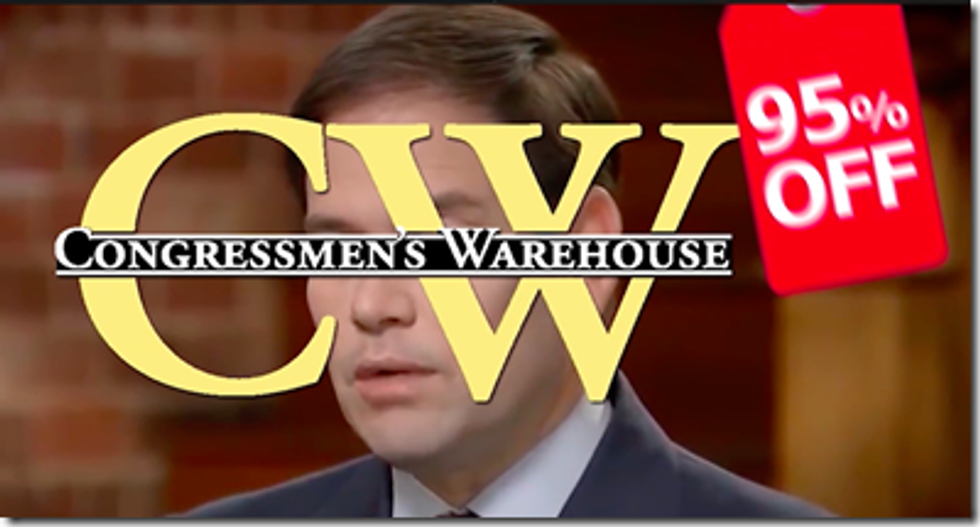 You may have seen the commercials for Men's Wearhouse, the dress clothes retailer, which end with the bearded CEO promising , "you're going to like the way you look. I guarantee it." But you almost certainly haven't seen the ad for Congressmen's Wearhouse... until now !

Because Congressmen's Wearhouse (CMW) doesn't exist, a least technically speaking. But a parody video from Big Bad Boris, satirizes the purchasing of politicians, and foresees a day when the falling price of candidates ushers in a whole new way of campaign-financing– cut-rate candidates for the budget-conscious consumer!

The mission of CMW is clear: "At Congressmen's Warehouse, you don't have to be a billionaire to buy a candidate. We welcome your dark money no matter what denomination it comes in,"  including bitcoins, Apple Pay and unmarked singles. 2016 has seen the rise of crowdfunding (Bernie) and self-funding (Trump) as alternatives to the super pac. Congressmen’s Warehouse offers another alternative – niche-funding or personalized pandering. Now every citizen can buy their own candidate, selecting from a ready-made set of memes, dog whistles and hidden agendas to advance their interests and obsessions.

They offer congressmen “tailored to your agenda and pocketbook," enabling customers to build their own standard-bearers out of the latest political styles and stances, from climate change denial, to second amendment fetishism, to transvaginal ultra-sounding.

Now that Marco Rubio has suspended his campaign, and will not be running for reelection in the senate, he's a total bargain. But act fast: "This week only," the CMW is offering "95% off on" the cisgendered restroom traditionalist."