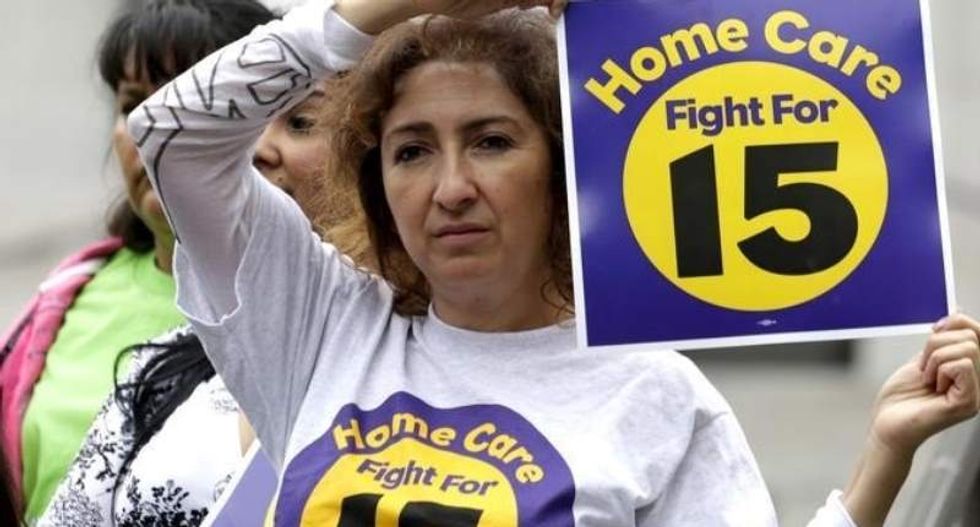 Ingrid Alarcon holds a sign before the Los Angeles City Council approved a proposal to increase the minimum wage to $15.00 per hour in Los Angeles, California on June 3, 2015. (Reuters/Jonathan Alcorn)

A proposal to raise California's minimum wage to $15 an hour by the year 2021 has qualified to be listed on the upcoming November ballot in the state, officials said on Tuesday.

The development comes as a wave of minimum wage increases at the state level sweeps the United States as the federal minimum wage has gone more than six years without an increase from $7.25 an hour.

The California Secretary of State's office said supporters of the measure, pushed by Labor group coalition Lift Up California, had gathered more than the 400,000 signatures needed to have the Fair Wage Act of 2016 placed on the ballot.

"California has led the country on environmental, health and civil rights protections and it’s only appropriate that we would become the first state to enact a minimum wage that allows millions of families to live in dignity," Los Angeles County Supervisor Sheila Kuehl said in a statement.

She added that the measure would build on the efforts of Los Angeles lawmakers, who last year passed a law hiking the city's minimum wage to $15 by 2020.

The measure would boost the state's minimum wage to $11 an hour in 2017, and increase it by a dollar an hour every year until reaching $15 an hour in 2021. After 2021, the minimum wage would be adjusted annually based on the rate of inflation.

The California Chamber of Commerce said earlier this month that it would oppose any state-wide ballot initiatives for a $15 minimum wage, arguing that it would create new costs for state and local governments as well as businesses.

A Field Poll published last August showed that about seven out of 10 respondents favored the measure, with nearly half saying they strongly favored it.

Fourteen states and several cities began the new year with increases to their minimum wage. California and Massachusetts saw some of the biggest hikes among the states, both increasing from $9 to $10 an hour, according to an analysis by the National Conference of State Legislatures.