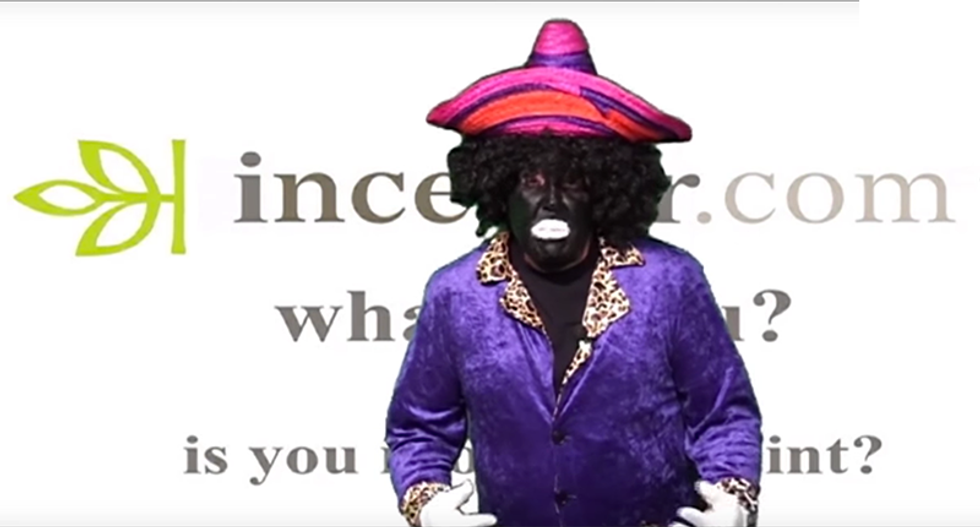 Gun Owners of America head Larry Pratt recently appeared on "Stuart Vener Tells It Like It Is."

Pratt has appeared on the show in the past to attack President Barack Obama, but according to Right Wing Watch his latest participation also coincided with a racially-charged fake commercial for "incestor.com."

Vener has a video of the fake ad on his YouTube page, and it shows him dressed in blackface and wearing a sombrero -- among other things.

Rebranding the Ancestry.com logo as “incestor.com,” Vener pops up on screen clad in a purple robe with a leopard print collar and in blackface. "Growin' up, we all thoughts we was Mexicans," he said. "We did all kinds of Mexican things. We mowed the lawn. We picked the fruit. We ate all that tamales and all that stuff..." He says he went to incestor.com and found out he was Chinese. He then appears holding chopsticks, talking about how he threw away his lawn mower. Ultimately, he ends up disparaging three races all in 60 seconds.

Vener is known for dressing up in costumes, but he particularly enjoys blackface. He seems to have a Steve Harvey fetish, appearing several times in blackface as Harvey for the Miss Universe accident and again for the Victoria's Secret runway show. There's also a video featuring Vener as Louis Farrakhan, with another person in blackface imitating Aunt Jemima.