Seth Meyers crushes Chris Christie for standing meekly behind Trump: It's 'the worst way to die' 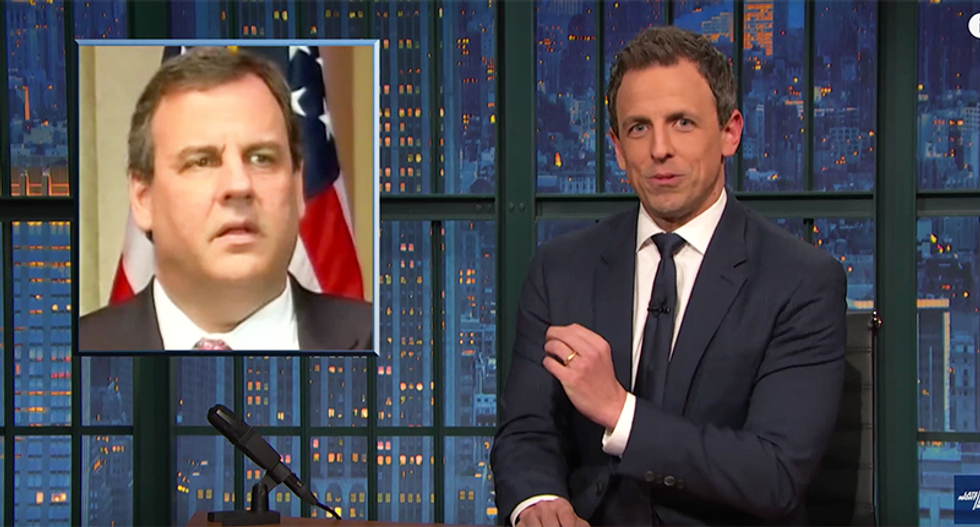 "This is the moment Republicans have been dreading," Seth Meyers told his "Late Night" audience on Wednesday. Trump is going to be the nominee or there's going to be a floor fight at the Republican Convention making the GOP look like the disaster that they actually are.

The only person who had a good night, other than Trump, was Ted Cruz, who is so anti-establishment he's hated by party leaders and most of his colleagues. It's "a choice so bad for GOP leaders it's best described by 10th-choice candidate Lindsey Graham," who said nominating Trump or Cruz would get the same outcome.

"Whether it's death by being shot or poisoning, does it really matter?" Graham concluded.

But there's an even worse way to die, according to Meyers: Standing behind Donald Trump at a press conference. "Or so you would think from looking at Chris Christie's face last night. This is the face o a man thinking to himself, 'Would it have killed me to keep two f*cking lanes open on the George Washington Bridge?'"

Meyers explained that Christie has fallen so far by being forced to stand silently behind Trump as Trump burned Christie's own state. Trump talked about companies that are leaving states like New York and New Jersey to somewhere else. Christie silently mouthed "no" while shaking his head behind Trump. "How did a man who use to do this," Meyers showed a clip of Christie at a press conference telling a reporter to sit down and shut-up. "Become a man who did this," he said showing the clip of Christie silently protesting. "Chris Christie went from Jabba the Hutt to Salacious Crumb."

The most terrifying thing at the Trump rally wasn't seeing Christie's pathetic fall, it was watching Donald Trump begin to soften his rhetoric to slowly become a more respectable candidate to appeal to more voters. Trump talked about being more inclusive and even admitted that he's watching MSNBC, "See I'm becoming diplomatic," he said.

"See, I'm becoming diplomatic? You're not supposed to say that out loud. That's like saying, 'I'm paying for dinner in hopes that you'll have sex with me later.'" Realizing Trump is smart enough to pivot for the General Election is absolutely terrifying to Meyers. "It's like the scene in Jurrasic World where Chris Pratt realizes Indominus Rex can climb walls." Meyers showed the clip of Pratt saying that it depended on what kind of dinosaur they cooked up in the lab. "That kind," Meyers said pointing to a T-Rex with a Trump coif. "The Tri-hair-atops. The Bronzasaurous."

Republicans are understandably freaking out and running for cover, claiming they're out if Trump becomes the leader of the party. Senate Majority Obstructor Mitch McConnell give his members permission to drop Trump "like a hot rock." "Why were you holding this rock in the first place?" Meyers asked.

Meanwhile, at Ted Cruz's victory party, the only promise the Texas Senator could manage to make was that January 20, 2017, would be President Obama's last day in office as if he was somehow personally responsible for writing that clause in the Constitution. "It's the only promise the GOP can confidently make right now, Obama won't get a ninth year," Meyers mocked.