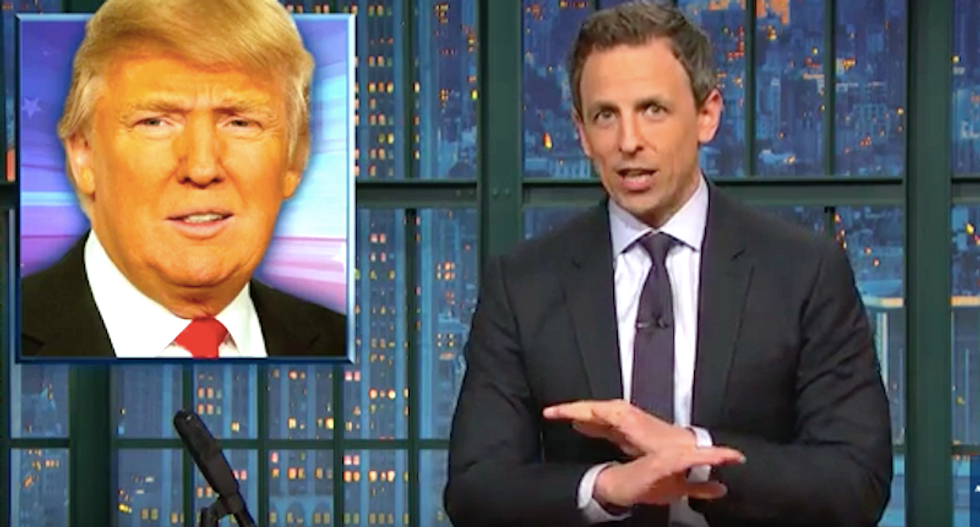 Trump last week proposed "dangerous new limits" on the First Amendment by opening up libel laws to make it easier for him to sue newspapers that publish "purposefully negative" articles about his presidency, if elected.

"Sue newspapers and make lots of money?" Meyers said. "Well, I've got bad news for you, pal -- newspapers don't have any money. That's like suing Radio Shack or MC Hammer."

"Trump wants to 'make America great again' by ripping up the thing that made it great in the first place -- the Constitution," Meyers said. "You might ask, would he really do that? Perhaps a clue lies in the number of times Trump has praised other actual dictators who have also restricted freedom of speech in their country."

The real estate tycoon and reality TV star praised Vladimir Putin as "a strong leader" for cracking down on journalists, and he wished U.S. leaders could kill terrorists like Saddam Hussein -- without being "politically correct."

Trump said he couldn't help but credit North Korea's Kim Jong Un, who he described as a "maniac," for exerting his control over his military generals.

"The best thing about that is, even when Donald Trump's praising Kim Jong Un, he's also burning him for being short," Meyers said. "Trump's praise for dictators is also very telling, because that's all Trump cares about: power. And judging from his skin, he's almost full -- it's time to unplug him."

The Republican presidential race has turned into a schoolyard fight, with Donald Trump and Marco Rubio slinging zingers at one another from the campaign trail.

Meyers said New Jersey Gov. Chris Christie, who he described as "the original schoolyard bully," couldn't resist jumping into the fray by endorsing Trump -- a move the "Late Night" host dismissed as "chickenshit."

"It is hard to find an act of political opportunism and self-interest as brazen as this one," Meyers said, reminding viewers of all the nasty things the governor previously had said about Trump.

Christie said as recently as January that Trump was poorly suited to the White House because he's immature, and he also said the president was not "an entertainer-in-chief."

Christie declined to endorse Rubio because he felt disrespected by the younger candidate's voice mail assurance that the 53-year-old governor still had a bright future in politics.

"Christie knew Trump would never disrespect him like that -- at least not until the first chance Trump had, which was after a rally in Texas on Friday," Meyers said, showing a clip of the GOP candidate telling Christie to get on a plane and go home as supporters cheered.

"Go home and get your f*cking shine box," Meyers said.

David Duke, the former grand wizard of the Ku Klux Klan, also threw his support behind Trump last week -- and Meyers said the candidate said he would have to make sure there were "something wrong" before he would disavow that backing during an appearance on CNN.

Trump later issued a disavowal, but Meyers said the GOP candidate had accomplished his goal with the feint.

"Even racists know you have to pretend not to be racist in public," Meyers said. "Trump lets just enough racism slip that racists can listen to him and think, 'Oh yeah, he's our guy.'"

Meyers said Trump's campaign had long ago gone from entertaining to scary -- sort of like that Samuel L. Jackson movie, "Snakes on a Plane."

"Sure, the idea is entertaining -- but an actual snake on your actual plane would be terrifying," Meyers said. "That's what's happening now -- the plane is American democracy, and the snake is Trump. And right now, all sane people everywhere are saying this: 'I have had it with these motherf*cking snakes on this motherf*cking plane.'"