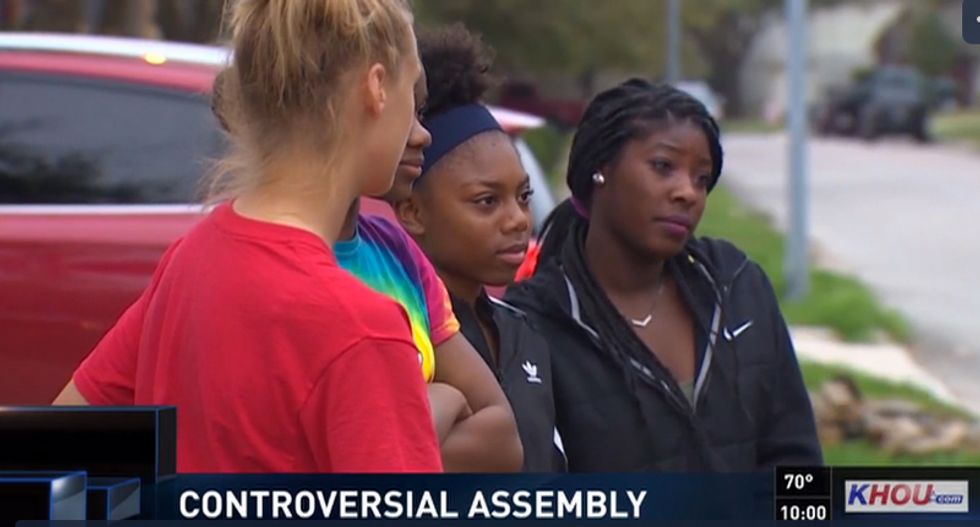 Officials at a Texas high school pulled the plug midway through a girls-only assembly on sexual abuse when the speaker snapped at several girls who weren't paying attention and said she wouldn't feel bad if they were raped, reports KHOU.

A guest speaker was brought in from a local domestic violence and sexual assault charity to speak to 9th and 10th grade girls at Humble High School about healthy relationships  and domestic violence. However, when some girls in the back on the room began chatting, the talk on self-esteem and protecting oneself took an ugly turn when the counselor snapped at them.

"She said when she moves the cover from over your face and they start swabbing and combing the hair -- she was explaining the rape kit -- she said she would not feel bad for us. She said she would tell us, 'Oh I told you this was going to happen to you,'" explained sophomore Chantranise Lane.

According to multiple girls in the room, teens became upset with some of them crying, including a few who are rape victims.

The school district confirmed that part of the talk had to do with what girls wear and what they post on social media, but the teens said they should be speaking with the boys and telling them not to rape.

"They shouldn't be telling students that just because you're posed a certain way, you're going to get assaulted. That shouldn't happen. You need to teach the boys not to do that," said Zaria Rogan,

"If somebody comes at me and I tell them 'No, you stop what you're doing,' that is a no. So if boys are not being taught this and they're being taught that if we portray ourselves like this then they can do what they want to us, then that's never going to change." added Emily Nelson

"I feel like they were degrading us making us bad for being a female," Lane explained. "They're making us feel bad for loving ourselves or trying to accept ourselves."

According to the school, the assembly was abruptly stopped and another planned for later was canceled before issuing a statement saying they never wanted the girls to feel uncomfortable about themselves.

The group that supplied the speaker said that they never had an issue before and weren't sure what happened, but were looking into it.

Watch the video from KHOU below: