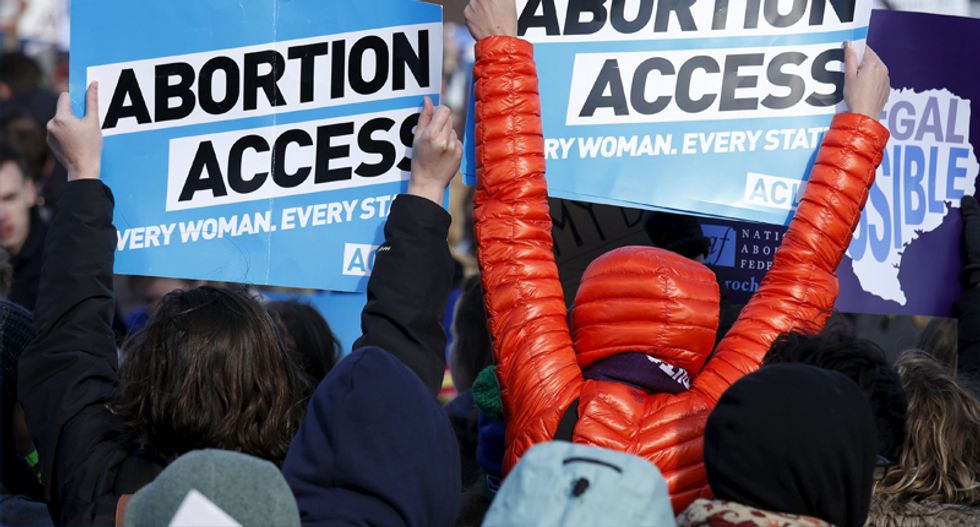 Protesters demonstrate in front of the U.S. Supreme Court in the morning as the court takes up a major abortion case focusing on whether a Texas law that imposes strict regulations on abortion doctors and clinic buildings interferes with the constitutional right of a woman to end her pregnancy, in Washington March 2, 2016. (REUTERS/Kevin Lamarque)

The U.S. Supreme Court on Wednesday appeared closely divided as it considered its first major abortion case in nearly a decade, with pivotal Justice Anthony Kennedy giving little indication how he would rule in a challenge to a Texas law imposing strict regulations on clinics and abortion doctors.

Kennedy, who often casts the deciding vote in close cases, at one point suggested sending the case back to a lower court for further evidence to be introduced on the law's impact, which could mean the case might not be resolved for years.

With the court one member short after the Feb. 13 death of Justice Antonin Scalia, the court could be split 4-4.

A 4-4 decision would let stand a lower-court ruling that affirmed the Texas law but no nationwide legal precedent would be set on whether other states can enact similar measures. If Kennedy, a conservative, sides with the four liberals, the court could strike the law down.

The court’s four liberals, led by Justice Ruth Bader Ginsburg, indicated hostility to the law. Justices on the court’s conservative wing were more sympathetic to Texas, raising questions about whether the law had closed down as many clinics as abortion providers had said.

The state contends the law, passed in 2013 by the Republican-controlled Texas legislature and signed by a Republican governor, protects women's health. The abortion providers who have challenged it assert that it is aimed at shutting down their clinics.

Hundreds of activists on both sides of the issue gathered outside the courthouse on a chilly, blustery day.

The Supreme Court legalized abortion more than four decades ago with its landmark ruling in the 1973 Roe v. Wade case. But abortion remains a disputed issue in the United States, as it does in many countries, and some states have passed laws aiming to place a variety of restrictions on a woman's ability to terminate a pregnancy.

The Texas law requires abortion doctors to have "admitting privileges," a type of formal affiliation, at a hospital within 30 miles (48 km) of the clinic. Abortion providers say the provision already has forced clinics to close because such an affiliation is hard for clinic doctors to obtain.

The abortion providers also challenged provisions in the law, not yet in effect, that require clinics to possess costly, hospital-grade facilities with standards for corridor width, plumbing, parking spaces, room size, the spacing of beds and many other attributes.

The Roe v. Wade ruling held that a woman's constitutional right to privacy protects her decision to end a pregnancy, and only a compelling state interest can justify regulating abortion. That decision was affirmed by the court in 1992, as the justices ruled that any regulation must not impose an "undue burden" on women seeking an abortion.

At issue in Wednesday's case was whether the Texas requirements violate that principle by putting a "substantial obstacle" in the path of a woman before a fetus becomes viable.

The case represents a high-stakes constitutional test for a strategic shift that abortion opponents have taken in recent years: to apply restrictive regulations to abortion doctors and facilities rather than try to ban the procedure outright.

The court is considering the case in the midst of the heated campaign ahead of the Nov. 8 U.S. presidential election.

The Supreme Court last decided a major abortion case in 2007 when it ruled 5-4 to uphold a federal law banning a late-term abortion procedure.

Among the hundreds of demonstrators outside the white marble courthouse was Taylor Crumpton, who came from rural Texas to protest against the Texas law, saying "every single abortion clinic I've ever seen or known has been shut down."

"This pro-life culture has just erupted in Texas and dehumanized women who even want to have an abortion," she said.

Annie Piper, a student at Liberty University, a Christian college in Lynchburg, Virginia, voiced support for the law.

"These actually are laws that are trying to help women," Piper said. "A lot of abortion clinics don't have the resources to provide proper care for women, so all our legislators are doing is making sure women get safe and proper healthcare."

One young woman clutched rosary beads in her hands and had red tape over her mouth with the word "life" written on it.

Dr. Bhavik Kumar, an abortion provider from Texas, spoke out against the law outside the courthouse.

"These laws have done nothing to make abortion safer," Kumar said. "If anything, it has put women in harm's way."

(Reporting by Lawrence Hurley; Additional reporting by Clarece Polke; Editing by Will Dunham)