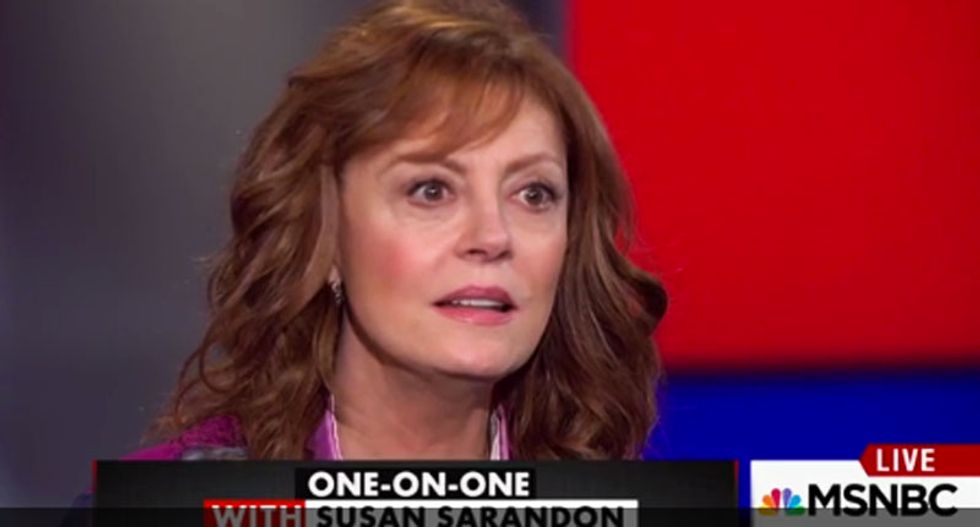 Actress and activist Susan Sarandon popped by for a visit with MSNBC's Chris Hayes Monday night to talk about -- among other topics -- the presidential candidacy of Vermont Sen. Bernie Sanders.

Putting it mildly: she's a big fan of Bernie and not so much a fan of Hillary Clinton -- but you probably already knew that.

Pressed by Hayes over elections being about "making choices," Sarandon explained that Bernie would likely encourage voters to back Clinton should she win the nomination, because "he doesn't have any ego in this thing."

This would likely make him the only politician to ever run for the position as The Most Powerful Man In The World out of a deep sense of humility.

Sarandon then added "But I think a lot of people are, 'Sorry, I just can't bring myself to [vote for Hillary].'"

Asked about her own vote, Sarandon replied, "I don't know, I'm going to see what happens," before she added with a smile, "You know, some people think Donald Trump will bring the revolution immediately. If he gets in then things will really, you know, explode."

Given an opportunity to concede that a Trump presidency might be "dangerous," Sarandon instead ticked off a litany of America's ills saying it was more dangerous for the country to continue on the way it is going -- but without noting that things would be far worse in Trump America.

So there you have it -- we are once again entering into the realm of "we had to destroy the village in order to save it" territory where folks are willing to play to play chicken with other people's lives because change does not come fast enough for them.

Of course, Sarandon left herself an out with the passive "some people," because she's just throwing it out there that those "people" are willing for the rest of us to endure a little pain in order to see the error of our ways; dim-witted uninformed neoliberal corporatists each and every one of us.

But Sarandon is right. Those people do exist out there and it's very likely that they believe that a revolution is a'comin' and it only needs the spark of a Trump presidency to burn it all down so that a Greater More Progressive Tomorrow can be built upon the ashes.

This is, of course, nuts and it threatens the progress of the almost eight years of the Obama administration -- and if you think we've gone backwards during that period because of his policies, then you may have slept through the horror of the Bush years.  Lucky you.

Of course, it is unlikely that Trump will be elected -- but why put progress at risk?

Whether Sanders gets the nomination or not -- and the math is certainly not in his favor -- he's earned a seat at the table. But it won't do him or you any good if you've burned the whole damn house down.

Watch the video below from Real Clear Politics: