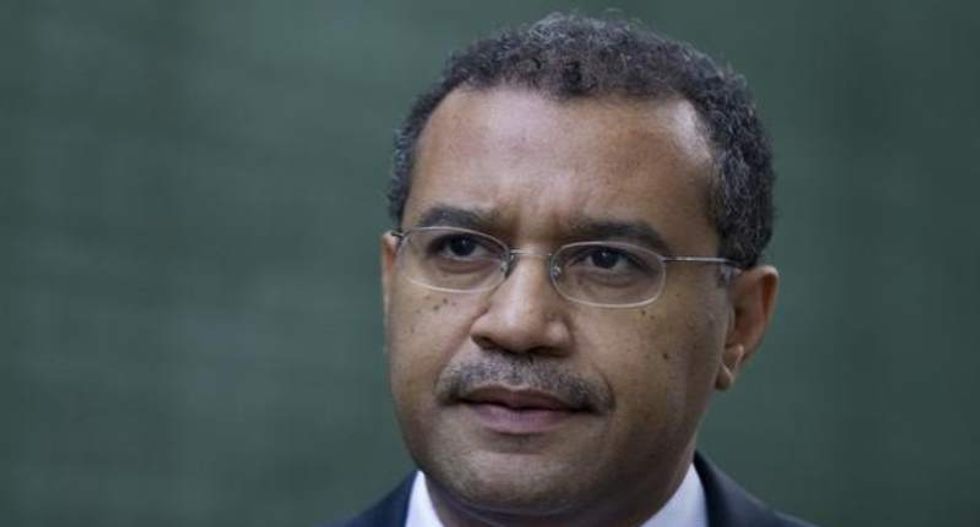 A suspended deputy United Nations ambassador from the Dominican Republic accused of participating in a scheme to bribe a former U.N. General Assembly president is expected to plead guilty on Wednesday, according to a court filing.

Francis Lorenzo, 48, is scheduled to appear in Manhattan federal court for a plea hearing, according to a docket entry on Monday. A lawyer for Lorenzo confirmed he would plead guilty at the hearing to charges including conspiracy to commit bribery.

"Ambassador Lorenzo is remorseful and has chosen to accept full responsibility for his participation in his criminal conduct with his co-defendants," said Brian Bieber, Lorenzo's lawyer.

Lorenzo is one of six individuals charged in October in connection with a scheme to pay more than $1.3 million in bribes to John Ashe, a former U.N. ambassador from Antigua and Barbuda and who served as General Assembly president from 2013 to 2014.

Prosecutors said those bribes included more than $500,000 that Ng Lap Seng, a billionaire real estate developer in Macau, paid through intermediaries to Ashe to seek U.N. support of a U.N.-sponsored conference center in Macau.

Ashe also received more than $800,000 from Chinese businessmen to support their interests within the United Nations and Antigua, prosecutors said.

Those bribes were arranged through Sheri Yan, who was the Global Sustainability Foundation's chief executive, and Heidi Hong Piao, the foundation's finance director, prosecutors said. Both women pleaded guilty in January.

Lorenzo, who was appointed deputy U.N. ambassador from the Dominican Republic in 2004, had previously sought to dismiss the charges against him on diplomatic immunity grounds.

But U.S. District Judge Vernon Broderick in February rejected his motion, saying that as a naturalized U.S. citizen, Lorenzo was not entitled to immunity due to his diplomatic role.

At Wednesday's hearing, Lorenzo will plead guilty to charges including that he engaged in conspiracies to commit bribery and money laundering and filed false tax returns, Bieber said.

(This version of the story corrects the counts Lorenzo will plead guilty to by removing reference to the number of counts in paragraph 11.)