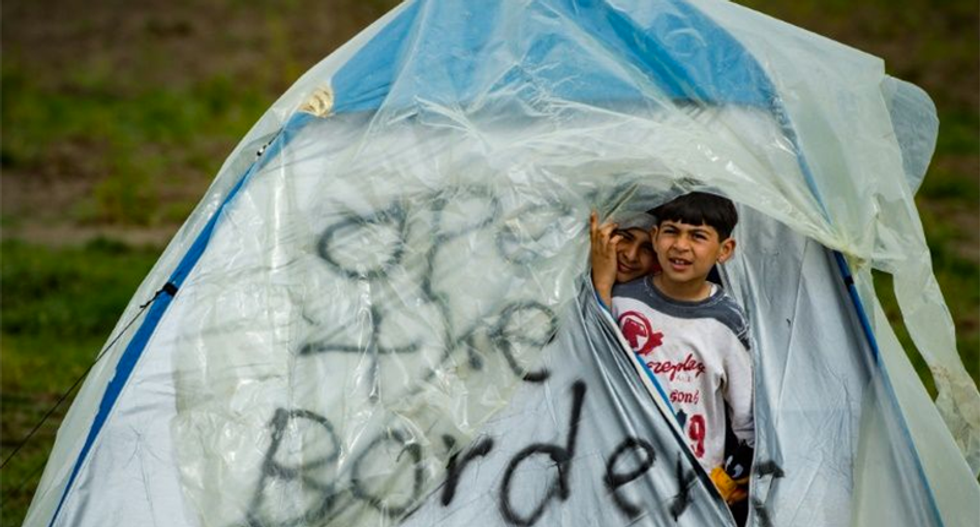 UN chief Ban Ki-moon Wednesday called for a united global effort to tackle the Syrian refugee crisis, as he opened a conference on securing resettlement places for nearly half a million of those displaced.

"We are here to address the biggest refugee and displacement crisis of our time," Ban told the conference in Geneva. "This demands an exponential increase in global solidarity."

The UN secretary general, a South Korean, recalled his own experience of fleeing his village with his family as a six-year-old during the Korean War sixty years ago and said that for him stories of refugees stranded in camps with meagre resources "have personal meaning."

"Attempts to demonise (refugees) are not only offensive; they are factually incorrect," Ban said, in an apparent reference to rising anti-migrant rhetoric increasingly being voiced by some political leaders across the developed world.

The Geneva meeting follows a conference in London in February where nations pledged $11 billion (9.7 billion euros) to help manage one of the largest displacements of people since World War Two.

The United Nations refugee agency (UNHCR) estimates that 4.8 million Syrians have been forced to flee the country during its five-year civil war, while another 6.6 million people have been internally displaced.

The aim of the Geneva meet is to secure relocation pledges for 10 percent of Syria's refugees, or 480,000 people, within three years.

The UN wants that number of people moved outside of Syria's neighbours, which are currently absorbing nearly the entire refugee burden.

Ban said the 480,000 figure was "a relatively small number," compared with those being hosted by Iraq, Jordan, Lebanon and Turkey.

The conference comes as the UN continues to blast a deal agreed between Turkey and the European Union earlier this month which calls for migrants who cross the Mediterranean seeking a life in Europe to be returned to Turkey.

The UN's refugee agency and rights office have condemned the deal as possibly illegal in that it appears to deny some migrants their legal right to asylum.

More than one million migrants -- about half of them Syrians -- reached Europe via the Mediterranean last year, a rate of arrivals that has continued through the first three months of 2016.

Some European states have temporarily shut borders and called for tough measures to stem the movement of people through the continent.

The UN and civil society groups have urged Europe's leaders to develop coherent and organised resettlement systems, to make migration to the continent safer and less chaotic.