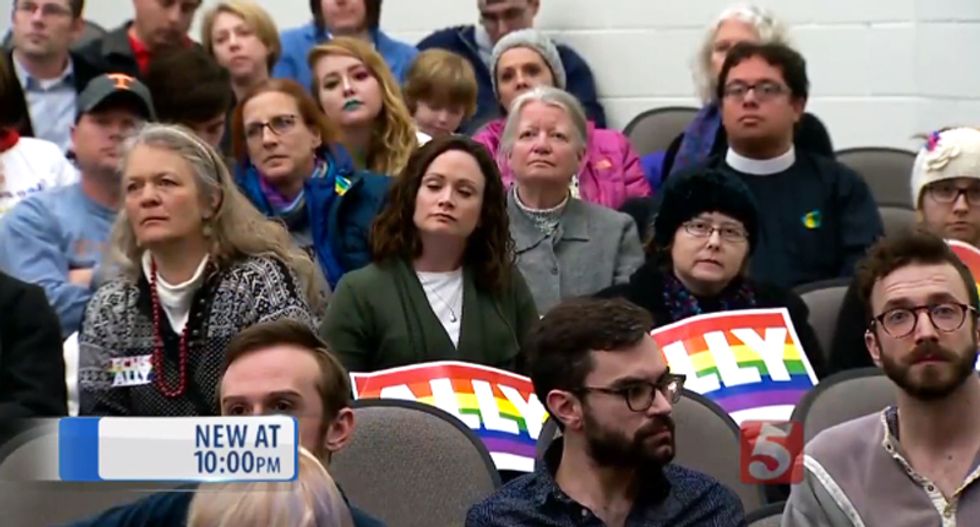 A Tennessee school board is giving serious consideration to calls from the public to eliminate all after-school clubs in an effort to eliminate a newly formed Gay-Straight Alliance at a local high school.

According to The New Civil Rights Movement, the Franklin County School Board will be meeting next week to address the future of the Gay-Straight Alliance at Franklin County High School that has roiled the community since it first met in January.

Among the possible solutions: dropping all non-academic after-school clubs in order to remain in compliance with federal Equal Access laws.

Elimination of the groups was proposed at a raucous meeting in February, after a local businessman and  parent in the area compared the teen support group to ISIS on Facebook.

According to board Chairman Kevin Caroland, banishing all of the clubs is being taken seriously.

"We discussed last night our policies and procedures and the possibility of getting rid of all clubs, and what all that would entail. There was not a consensus. that I could tell," Caroland said in an interview with  TNCRM. “We had a large number of emails that have asked us to look at that.”

"We’re trying to spell out for the community what would happen if we shut down all clubs," Caroland continued. "I think the community needs to be educated on what the consequences are of doing that. We're just trying to get it all laid out so nobody’s surprised by anything."

During the February meeting, the rhetoric grew heated inside as competing student groups rallied outside -- with one group waving rainbow flags while critics of the club waved Confederate flags.

Franklin County High School currently has 17 extra-curricular clubs that would be scrutinized under new guidelines proposed Monday night, providing the board doesn't shut them all down.