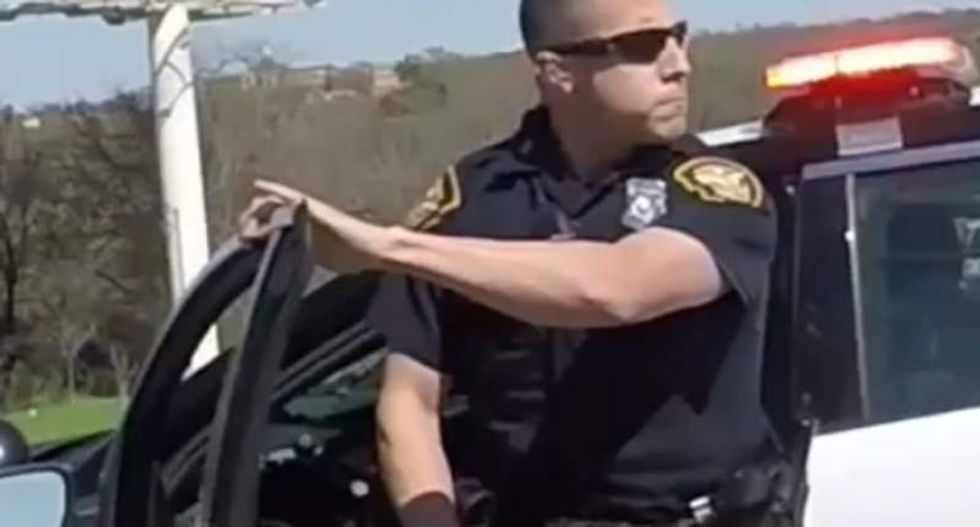 A police officer in Fort Worth, Texas is under investigation following the release of video footage showing him trying to use his pepper spray against a group of motorcyclists who were not interacting with him.

The Fort Worth Star-Telegram identified the officer as "W. Figueroa," using the name listed for him in an incident report on Sunday.

According to the Dallas Morning News, Figueroa had pulled over a pickup and was citing the driver, Brittany Botella, and her passengers for blocking traffic while filming the bikers.

The footage shows Figueroa pull out his spray canister and fire it toward the bikers, who were passing by the traffic stop on US route 287. It was later posted on Facebook and YouTube by a member of the group, Chase Stone.

Stone said that he was part of a group of 200 riders who took part in the ride to "welcome back" riding weather.

One of the passengers, Grace Cho, said in the Facebook post she was sitting in the back of the pickup at the time of the incident, and that some of the pepper spray blew into her face. Stone later corroborated her account.

"I looked over and I see the people in the back of the truck ducking, covering their eyes," he said. "They were covering their mouths and seemed to be in distress. I was like, something is going on."

Authorities told the Star-Telegram that they received several calls accusing Stone's group of reckless driving and obstruction of traffic. Jack Kinney, the rider who shot the video, accused police of conducting a "propaganda campaign to try to mitigate the damage."

"What's in the video? The people at that time, they weren't committing any crime," he said. "They were driving slower than the speed limit and they got pepper sprayed for it."

Figueroa has been with the department for six years. He has been taken off patrol duties for the duration of the investigation.

Watch the video, as posted by the Star-Telegram, below.