The 18th century Frenchman who understood America better than Trump 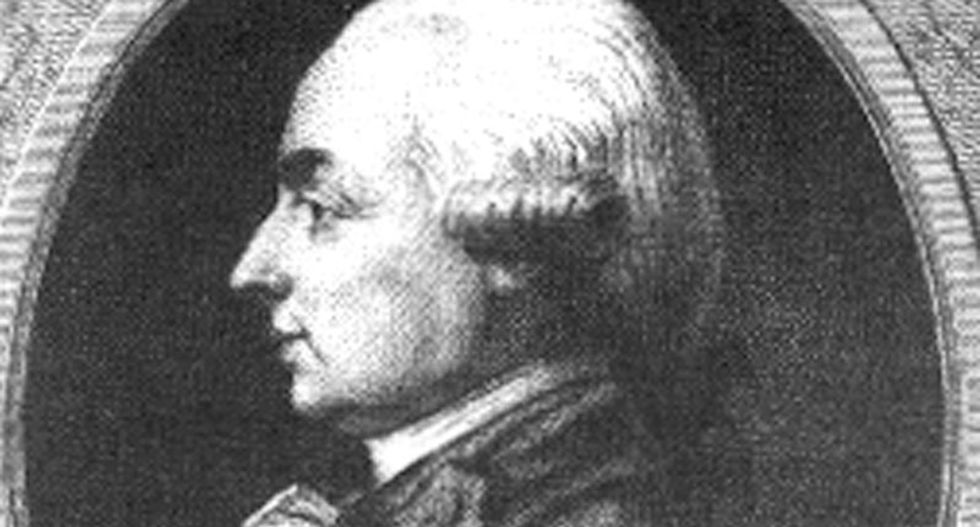 In 1782 the venerable London publishing firm of Davis & Davis released a surprise hit on the European market, a roman a clef by a Jesuit-educated French soldier and gentleman named J. Hector St. John de Crèvecoeur entitled Letters from an American Farmer. Imprisoned for two years in New York City by the British (who assumed he was a Revolutionary agent), de Crèvecoeur eventually made his way first to Ireland, and then to England, before finally returning to his native France (on the cusp of its own Revolution). His Letters from an American Farmer provided a European audience with an image of the New World, and of the Revolutionary Republic that was in the process of forming there (even as scholars still debate de Crèvecoeur’s own political allegiances).

Composed as a series of twelve responses by a fictional Pennsylvanian farmer named James to an interlocutor in Europe, the text served as an introduction to the culture, topography, and ecology of the American continent. The work also provided an example of colonists’ burgeoning sense of American identity, one that defined nationhood and citizenship not by ethnicity and religion (as the nation-states of the Old World did), but rather by allegiance to a revolutionary covenantal bond that was almost a new religion in and of itself. It was a view of nationality that de Crèvecoeur, as a Frenchman and Catholic living in a largely Anglo-Protestant colony, found to be not just radical, but almost millennial.

In his third letter, he writes that “The American is a new man, who acts upon new principles.” De Crèvecoeur was a resident of New York, and his character James was from Pennsylvania, both middle colonies known for their relative religious freedom and their amicable diversity. He writes, “Here individuals of all great nations are melted into a new race of men, whose labors and posterity will one day cause great changes in the world.” In de Crèvecoeur’s mind, the multiple languages of English, German, Dutch, Swedish, Algonquin, and Iroquoian, the multiple faiths of Quakers, Anabaptists, Anglicans, and Catholics, and the wide spread of ethnicities would forge what he saw as the coming greatness of America. He mentions settlers who are “English, Scotch, Irish, French, Dutch, Germans, and Swedes” (and we would do well to also mention the presence of African slaves as well) and from whom “this promiscuous breed, that race now called Americans have arisen.” A veteran of the French side in the Seven Years War, de Crèvecoeur appreciated the flexible bounds of identity that America afforded him, writing that he “could point out to you a family whose grandfather was an Englishman, whose wife was Dutch, whose son married a French woman.”

Though de Crèvecoeur’s world was much more circumscribed than ours today, his basic reasoning remains the same. The lists of ethnicities, languages, and religions have grown longer, but it’s not hard to assume that his conception of America as being a nation where our personal identity should not be defined by denominational affiliation or ethnic categorization remains a central tenant of our national civil religion. This is, after all, part of the stories we tell ourselves about ancestors who immigrated to the United States, it is the sentiment we see in Emma Lazarus’s words inscribed at the base of the State of Liberty, it is the spirit of the oath of citizenship which immigrants take every day. The historian Benedict Andersen defined the concept of “imagined communities.” That is, that nation states are composed of large numbers of people who will never known one another, and that there must be some motivating conceptual framework to structure peoples’ understanding of their national identity. In some countries there is an ethnic or religious definition of identity. In America, what structures the conception of our community, is the rather abstract desire to be an American. In America genealogy is not destiny, but rather self-definition is providence. As de Crèvecoeur writes, “After a foreigner… is arrived… let him devoutly listen to the voice of our great parent, which says to him, ‘Welcome to my shores…I shall endow thee beside with the immunities of a freeman.’”

Reading de Crèvecoeur in 2016 is helpful as we confront the possibility of Donald Trump, a reactionary demagogue who has had open dalliances with white supremacist rhetoric, becoming the presumptive presidential nominee of the Republican Party. This is a man who has recently refused to condemn the endorsement of David Duke and the Ku Klux Klan, who has called for the forced deportation of Mexican immigrants, and who has proposed a national database and ban on all Muslims from entering the United States.

The reason why reading de Crèvecoeur can be so important in this moment is that it reminds us that the word “America” has never just been the provenance of isolationists, nativists, Know Nothings, and bigots; indeed from the very beginning “America” and the nation’s attendant identity has been conceptualized as expansive, diverse, and more than the sum-of-its-parts. Trump speaks in the rhetoric of jeremiad when he claims he wishes to “Make America Great Again,” but it’s important not to cede the grounds of definition to a man like that, and it’s important to understand what exactly he means, and what’s fallacious about it.

Even for people disgusted by Trump’s rhetoric there can be a conception that he is accurate in pointing out that the nation has grown more racially, ethnically, and religiously diverse. But these changes are alterations in degree, not in kind. De Crèvecoeur reminds us that from the beginning this was a land defined not by origin, appearance, language, or creed, but rather by adherence to an idea bigger than all of those things. That this is a quasi-religious concept is not to denigrate it, and indeed as sociologist Robert Bellah has pointed out, American civil religion is a concept which is able to bind together diverse communities in a new identity. In rejecting both those diverse communities, and indeed the idea of diversity itself, Trump is in a sense rejecting America.

It would of course be foolish not to recognize the long, if odious, traditions of white supremacy, xenophobia, and bigotry which have made Trump’s success possible. The word “America” has often itself been a cipher for debates over restriction and expansiveness, authority and liberty. We once fought a near-apocalyptic civil war to settle some of those questions. But while Trump may embody certain noxious themes in American history (and his German surname “Drumpf” ironically highlights the very diversity which many of his supporters abhor), we can side with the de Crèvecoeurs.

Trump and his supporters may imagine the country as having always been defined by a certain Anglo-Protestant hegemony, but not only is that restrictive view poisonous for the future; it’s one that isn’t even born out by a careful reading of the past. In a sense America was founded as a religious nation, but not as a Christian one; rather, our religion is simply an expansive understanding of the idea of America itself. And in the scriptural language of that religion, Trump is an apostate, and a heretic. For him, the claim that he would make American “great” again is really a desire to make America small. In denying our diverse origins he ironically abandons American exceptionality at its most noble, and reduces a transcendent creed to simply a matter of crude, tribal allegiances.

In the eighteenth-century De Crèvecoeur asked “What is an American?” and his response was expansive; in the twenty-first century Trump’s supporters ask the same thing, and their answer is tiny. In the days ahead I hope and pray that we choose to live in de Crèvecoeur’s America, which has no need of being made great again (as it is already great).