'This is a great man': Nascar CEO Brian France and prominent drivers back Donald Trump 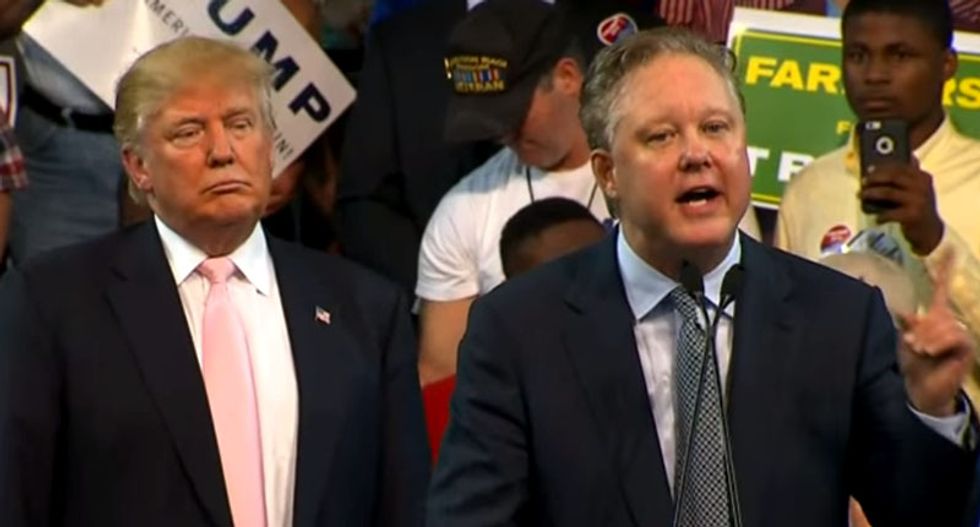 Donald Trump received an extra boost in his bid for president after Nascar boss Brian France and several prominent drivers gave him their backing on Monday – although Nascar insisted their comments did not amount to a formal endorsement from the car-racing body.

On the eve of Super Tuesday, where a series of sweeping victories are set leave Trump as the overwhelming favorite for the Republican nomination , France, Nascar’s chairman and CEO, joined Trump on stage at a rally at Valdosta State University in Georgia and declared his unqualified support.

“I’ve known Donald for over 20 years,” France said during the rally. “I’m going to tell you one thing about him: you know about his winning in business and success. I’m here to tell you: he wins with his family. Any of his children, you’d be proud to have them as part of your family.

Trump has been married three times, and has five children.

As the drivers left the stage, Trump thanked them and then told his audience: “That’s cute. They just said: ‘Keep that wall going.’ We’re going to keep the wall going. Believe me. Believe me.”

Trump has promised to deport millions of immigrants and build a wall on America’s southern border . “I would build a great, great wall on our southern border and I will have Mexico pay for that wall. Mark my words,” Trump boasted at his campaign launch in June.

Shortly after Trump announced he was running for president, Nascar said it would no longer hold its season-ending awards ceremony at Trump’s luxury hotel in Miami, the National Doral.

But Nascar’s owner was full of praise for Trump on Monday. In a news release after the rally, France, 62, said: “Mr Trump is changing American politics forever, and his leadership and strength are desperately needed. He has had an incredible career and achieved tremendous success. This is what we need for our country.”

Bill Elliott, a former Nascar great who won the association’s most popular driver award a record 16 times, echoed France’s comments. “It is my great honor to endorse Donald Trump for president of the United States,” he said. “He is a leader representing strength and commonsense solutions.”

“This is a great man,” Chase Elliott said. “I think he’s a guy who can do some great things for us.”

Spokesman David Higdon, however, insisted France was not speaking for Nascar. “Private, personal decision by Brian,” Higdon said in an email.

Nascar sanctions over 1,500 races at over 100 tracks in 39 states, and holds 11 of its 38 Sprint Cup events at states with primaries Tuesday. According to Forbes, the top 10 Nascar teams are now worth an average $148m, and generated nearly $1bn in combined revenue last season.

“If the people that like and watch Nascar vote for Donald Trump, they can cancel the election right now. Nobody can win,” Trump said at the rally.

Watch video, courtesy of the Associated Press, below: