Tom Cotton: Trump would be ‘a more serious' commander in chief than Hillary 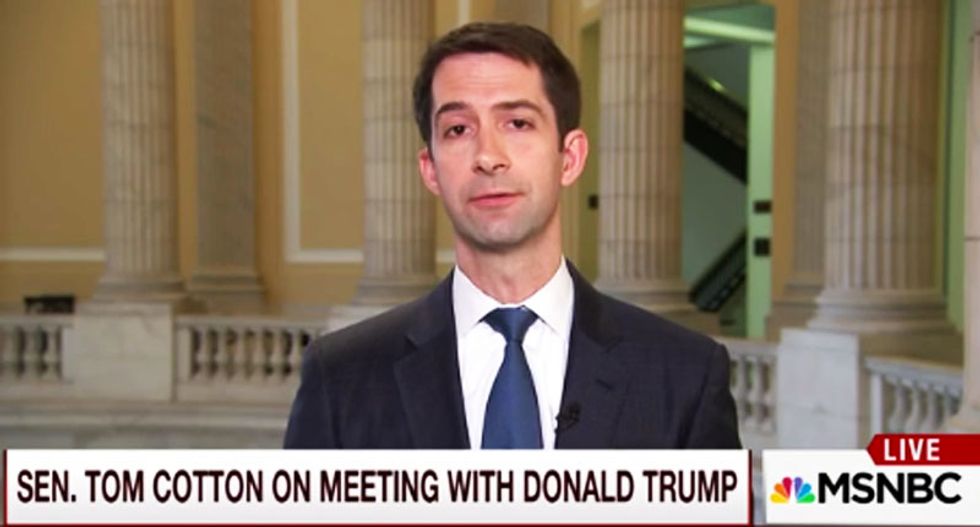 Cotton began by criticizing President Obama for not rushing home after the Brussels attack to "keep us safe" before turning to a meeting that he recently had with GOP presidential front-runner Trump.

Asked by host Willie Geist if Trump impressed him during the recent meeting, Cotton said he had some policy differences with Trump over NATO but agreed with him in principle.

"Did you leave that room thinking that's a man who could be commander in chief?" Geist asked Cotton.

"Well, I do think he could our commander in chief," Cotton replied. "He's one of our leading candidates, right now and, as I said,  would be a better commander and chief -- they'd be a more serious leader for our country than Hillary Clinton is."

Cotton's interview comes on the heels of a Washington Post editorial board interview with Trump, where the candidate was asked, "You would not use a tactical nuclear weapon against ISIS?"

"I’ll tell you one thing, this is a very good looking group of people here. Could I just go around so I know who the hell I’m talking to?" Trump replied.

.@SenTomCotton: I share some of Trump's questions on NATO https://t.co/r6xHyvjnqv