Trevor Noah: GOP would rather take guns from kids' cold dead hands than keep them from being killed 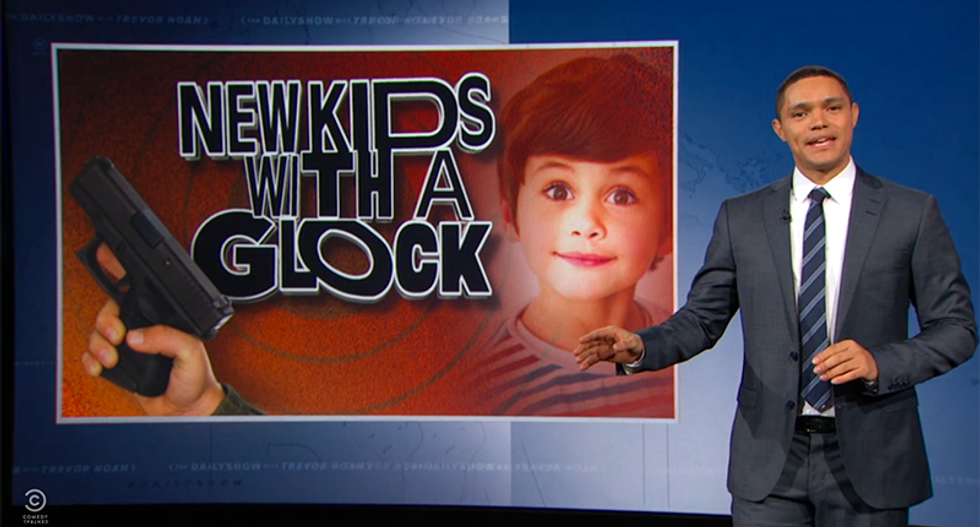 "The Daily Show" took a disturbing turn on Tuesday night when Trevor Noah did a segment on the new law that the Iowa state House is working to pass allowing children under 14 to have handguns. "Beliebers vs. Directoners just got a whole lot more interesting," Noah said about the notorious feud between teen Justin Bieber and One Direction fans.

The way the law works currently in Iowa is that children can use long guns for target practice and hunting, but handguns are banned. "Some kids do like hunting," Noah said. "It's those kids who only like the first five minutes of Bambi." The rule, however, is that an adult must provide visual and verbal contact with the shooting child at all times.

Noah showed a clip of a local news report about Nathan Gibson, a man who said that he's been lobbying his legislature for a long time to let his daughters shoot handguns. But he's been allowing them to shoot handguns since they were 5-years-old so, it isn't as if a law stopped him. But, just when you thought politicians couldn't get anything done, this guy got a politician to do something.

"Just to get this straight: Some guy picked up the phone and called a lawmaker and said 'Hey, uh, my kids need guns.' And they were like, 'Done!' And every day in America there's parents calling lawmakers saying, 'Hey, my kids died because of guns.' And they're like, 'Uhh, can you hold?'" Meanwhile, in Iowa, you need a license to braid hair, but we're giving children handguns. We can't have condoms in school but kids can have guns.

"Do you know what children are?" Noah asked. "These things," and he showed a compilation of videos of children throwing tantrums. "Who watches that and says, 'Uh, I like that, but it's missing something.'" Noah then showed the same video of a kid throwing a fit, but now even more disturbing, with a handgun firing at the same time. "Oh, and by the way, that was under adult supervision. You do realize that. That kid was doing that under adult supervision. I love that the adult was like, 'I'm just gonna video this.'"

The positive side of all of this is that, while the law may be expected to pass in the House but it won't pass in the Democratically held Senate. But the frightening thing is that most states don't even restrict children from using handguns. "They also allow dogs to use handguns... Well, they don't actually allow them, but there's no law against it and apparently if there's no law against it then it's not like we're going to use our common sense." Dogs with guns can be cute, after all. "What did you do boy? Timmy won't bother me anymore? What did you do? Good shot, boy! Good shot!" Noah joked.

Check out the video below complete with a PSA on guns for kids: