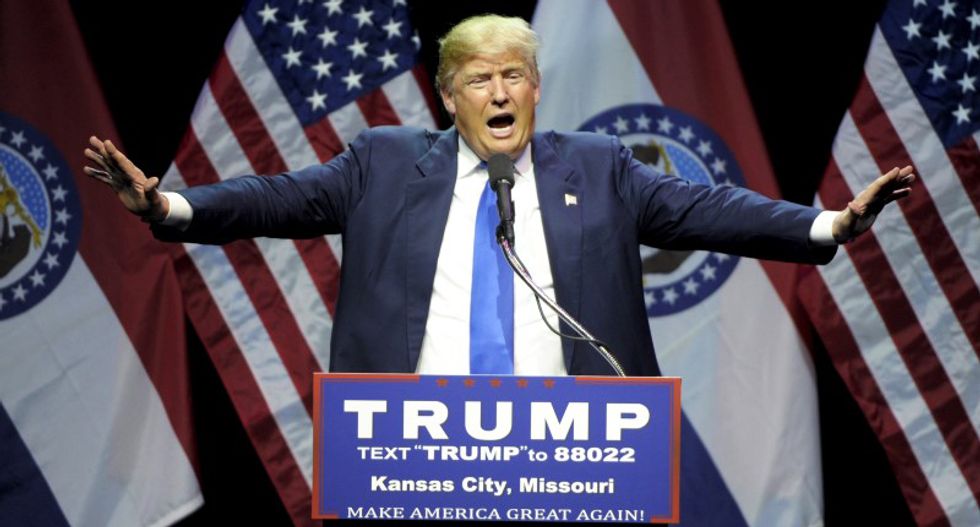 Republican presidential candidate Donald Trump refused to take responsibility on Sunday for clashes that have erupted at his campaign events, saying he was not inciting violence but giving voice to the anger of his supporters.

The real estate tycoon used a round of television appearances to beat back furious criticism from Republican rivals and Democrats alike that he was encouraging discord with divisive language disparaging Muslims and immigrants.

"I don't accept responsibility. I do not condone violence in any shape," Trump said on NBC's "Meet the Press."

The tension at his rallies, Trump said, came from people being "sick and tired" of American leadership that has cost them jobs through international trade deals, failed to defeat Islamic State terrorism and treats military veterans poorly.

"The people are angry at that - they're not angry about something I'm saying. I'm just the messenger," Trump said.

Trump, front-runner for the Republican nomination, appeared unchastened after simmering tensions between his supporters and protesters angry over his positions on immigration and Muslims erupted on Friday night, forcing him to cancel a Chicago rally and casting a shadow over his campaign appearances on Saturday.

The disturbances erupted days before the next five presidential nominating contests on Tuesday, which could cement the New York billionaire's lead over Republican rivals U.S. Senators Ted Cruz and Marco Rubio and Ohio Governor John Kasich.

The scenes in Chicago followed several weeks of violence at Trump rallies, in which protesters and journalists have been punched, tackled and hustled out of venues, raising concerns about security heading into the Nov. 8 presidential election to replace Democratic President Barack Obama.

Trump's rivals for the Republican nomination, as well as Democratic candidates Hillary Clinton and Bernie Sanders, heaped criticism on the New York billionaire after Friday's clashes.

Kasich said Trump had created a "toxic environment." On Sunday he stressed that he was hearing Trump supporters' concerns about job stability, wages and the future and that he was the candidate who could "fix things".

"Those are the people that need to hear me."

Trump, who has rallies scheduled on Sunday in Illinois, Ohio and Florida, hopes to beat both Kasich and Rubio, the U.S. senator from Florida, in their home states on Tuesday.

Both states award all their delegates to the winner.

Trump has harnessed the discontent of white, working class voters angry over international trade deals that cost them jobs. He has proposed building a wall along the southern U.S. border, disparaged some Mexican immigrants as criminals and advocated a temporary ban on Muslims entering the country.

On Sunday, he turned the criticism of his rallies against the protesters he called professional "disrupters" sent by Sanders, the U.S. senator from Vermont.

"Bernie Sanders is lying when he says his disruptors aren't told to go to my events. Be careful Bernie, or my supporters will go to yours!" Trump said on Twitter early on Sunday.

Sanders responded by warning that Trump has been an "incredibly divisive" figure whose "rhetoric is inciting violence." "So I really hope he tones it down. This is not good for the country," Sanders said on CBS' "Face the Nation."

Trump showed no signs of toning down. He accused the protesters of arriving at his rallies armed with tomatoes to throw at him or of sticking their middle finger up.

Trump said one 78-year-old supporter who sucker-punched a young black man being led out of a rally last week "got carried away" and told NBC he had instructed his staff to look into paying the man's legal fees.

Trump has used aggressive language against protesters at his rallies, yelling at them to get out and once saying he would like to punch one of them.