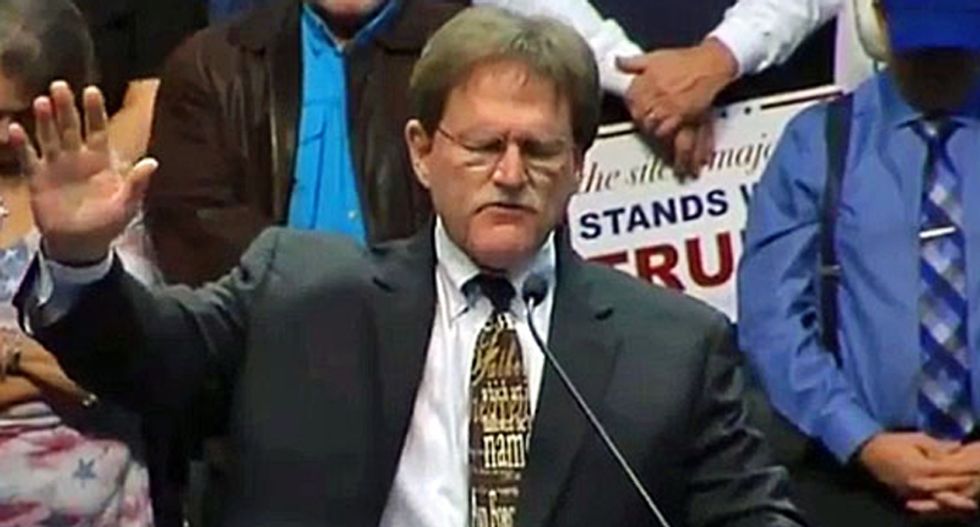 Front-running GOP presidential candidate Donald Trump is calling it a "great honor" to receive the endorsement of a Florida pastor who mocked the parents of children killed at Sandy Hook and claimed they were "actors."

According to Media Matters, Trump's campaign has allied itself with Hickory Hammock Baptist Church senior pastor Carl Gallups in an attempt to influence voters in the state prior to the March 15 primary.

The Christian leader opened a Trump rally in January, praising the candidate and leading the rally-goers in an opening prayer.

In an interview with World Net Daily, Gallups called the New York businessman "the anti-Obama."

“He loves this nation and its heritage,” Gallups explained. “He’s the anti-Obama, he’s the opposite of Obama. And he’s commander in chief material, he has that kind of presence, and he’d be tough on our enemies.”

Gallups, who also hosts a radio show, has also claimed that the Sandy Hook shootings were staged, calling the parents of one of the children actors.

Speaking of grieving father David Wheeler, Gallups said, "Yeah, he was dragged before the nation by Obama after the Newtown school shooting, supposedly, Sandy Hook, and was -- played the part of a grieving father with a woman standing beside him crying, slinging snot, carrying on -- of course, right before he went to the podium, he was laughing and carrying on."

Gallups was corrected by his guest who pointed out the man was another father of a child killed at Sandy Hook, before the pastor returned to mocking Wheeler and his wife.

"But this guy, this guy -- he and his so-called wife, they're standing up there and they're grieving and, you know, 'My child, my child.' And this and that. And, 'We gotta take guns, you gotta get guns.' And that was what the whole thing is about. But in the meantime, Barry [Gallup's guest] has uncovered the fact that this dude is a Hollywood actor, his so-called wife is a Hollywood actor, and then he found footage, television footage of this guy at Sandy Hook in an FBI SWAT team outfit -- it's the same dude, folks," Gallups explained. "When you look at -- there is no denying it. Every facial feature, and it's the same guy. And then he's got pictures, he's got video of, showing this guy. So how can he be a Hollywood actor, and an FBI SWAT team member who was at Sandy Hook, and a grieving father who's flying around on Air Force One with Obama, and a advocate for gun control. I mean, how can that be?"

Audio of Gallups discussing Sandy Hook below, via Media Matters: