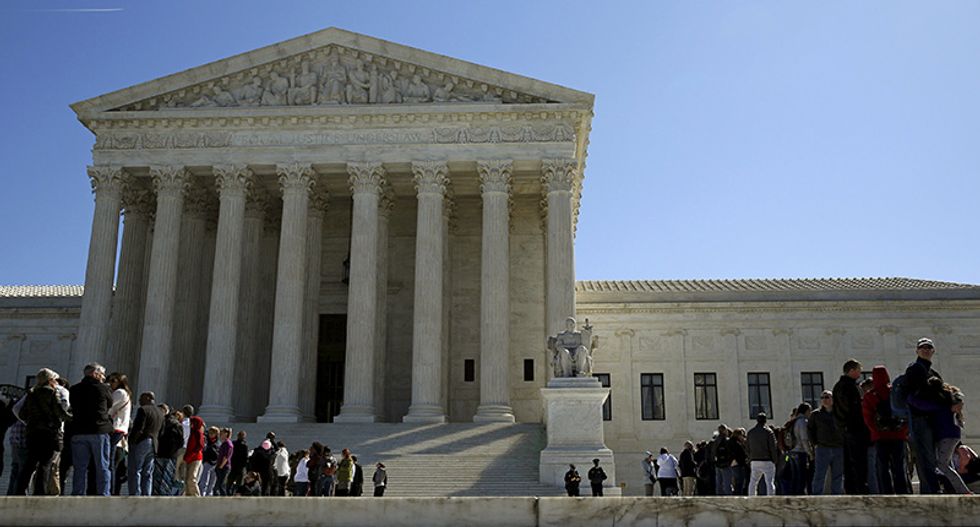 Public sector unions triumphed before the U.S. Supreme Court on Tuesday when the justices preserved a vital source of cash for organized labor, splitting 4-4 on a conservative challenge that had seemed destined for success until Justice Antonin Scalia's death last month.

The case brought by non-union public school teachers in California had targeted fees that many states force such workers to pay unions in lieu of dues to fund collective bargaining and other activities. A loss in this case would have deprived unions representing teachers, police, transit workers, firefighters and other government employees of millions of dollars annually and diminished their political clout.

The outcome illustrated the impact on the court of the Feb. 13 death of Scalia, the long-serving conservative justice who almost certainly would have cast a decisive vote against the unions. But by virtue of splitting 4-4, the justices affirmed a 2014 lower-court ruling that allowed California to compel non-union workers to pay the fees.

"The death of Justice Scalia has proved a disaster for public sector workers who have their paychecks raided by unions," said Iain Murray, vice president for strategy at the Competitive Enterprise Institute, a conservative think tank in Washington.

The court, evenly divided with four liberals and four conservatives, left intact a 1977 legal precedent that allowed such fees, which conservatives have long abhorred. Conservatives for years have tried to curb the influence of public sector unions, which typically back the Democratic Party and liberal causes.

The case reached the high court after a Washington-based conservative group, the Center for Individual Rights, sued on behalf of lead plaintiff Rebecca Friedrichs, an elementary school teacher in Anaheim, and nine other teachers. They argued the fees infringed upon the free-speech rights of non-union workers under the U.S. Constitution.

During Jan. 11 oral arguments in the case, Scalia was still on the bench, giving the court a majority of five conservatives. The conservative justices during the arguments voiced support for the non-union teachers.

It is the second case in which the court has split 4-4 since Scalia died, with more likely in the coming months, perhaps including major cases on abortion, voting rights and contraception insurance coverage.

It remains unclear when Scalia will be replaced. Senate Republicans have vowed to block confirmation of President Barack Obama's nominee to replace Scalia, centrist appellate judge Merrick Garland. Republicans fear Garland's confirmation would tilt the court to the left for the first time in decades.

At issue in the case decided on Tuesday were so-called agency fees equivalent to union dues, currently mandatory for non-union workers under laws in about half the states including California. The decision means the status quo remains, with the unions able to collect fees from non-union workers.

California's non-union teachers pay the union, which has 325,000 members, around $600 annually in mandatory fees for collective bargaining.

The non-union teachers' lawyers said they plan to ask the court to rehear case.

"With the death of Justice Scalia, this outcome was not unexpected," said Terry Pell, president of the Center for Individual Rights.

The split decision means there is "ongoing doubt about the constitutionality of its forcible collection of millions of dollars in dues," Pell added.

About 5 million public sector employees are subject to union contracts that include mandatory fee provisions, according to the National Right to Work Legal Defense Foundation, which backed the non-union teachers.

Organized labor had expressed worries that a ruling throwing out the fees would give employees less incentive to join public-sector unions because they would get all the benefits of collective bargaining undertaken by unions without having to pay for it.

The teachers who filed the lawsuit in 2013 asked the justices to overturn the 1977 Abood v. Detroit Board of Education Supreme Court ruling that allowed laws that permitted public sector unions to collect fees from workers who were not members as long as the money was not spent on political activities.

The ruling comes as a relief to organized labor because unionized civil servants in states without right-to-work laws comprise its main power base.