Univ. of California-Berkeley law school dean resigns after admitting to harassing his assistant 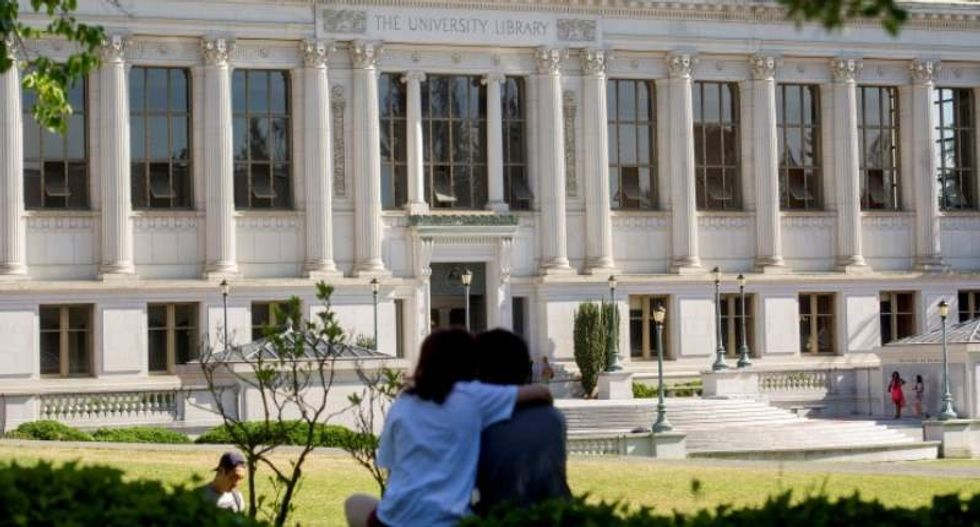 A couple sits in front of Doe Library at the University of California at Berkeley in Berkeley, California on May 12, 2014. (Reuters/Noah Berger)

The law school dean for the University of California at Berkeley resigned his post on Thursday after admitting to physical contact with his executive assistant that campus officials said violated the school's sexual harassment policy.

The departure of Sujit Choudhry, 46, who faces a lawsuit by his accuser, came amid heightened scrutiny of the way in which colleges and universities across the country have dealt with allegations of rape and sexual abuse on campuses.

Choudhry has admitted to engaging in unwanted physical contact with his assistant on multiple occasions, including hugging and kissing her. He has also admitted to holding her hands to his waist and touching her shoulders and arms from behind while she sat at her desk, according to a university statement.

But Choudhry, who will remain on the law school faculty for the time being, has denied sexually harassing his assistant.

The assistant, who was not named in an investigative report from the school's Office for the Prevention of Harassment and Discrimination, also complained that Choudhry directed her to perform personal tasks on his behalf, such as mailing mortgage documents and finding him a laundromat.

The move came a day after the school said Choudhry was going on indefinite leave over the issue. An announcement about an interim replacement for the position of dean will be made as soon as possible, the school said.

Choudhry said in a statement he had fully cooperated with the school in its investigation and denied he engaged in sexual harassment.

"I will immediately begin a leave of absence as Dean of Berkeley Law, in order to ensure that this lawsuit does not become a distraction for the Law School, the University, and our community," Choudhry said in a statement on Wednesday.

Choudhry's accuser has been placed on paid leave until she is ready to return to work, the school said.

The Daily Californian student newspaper reported that the lawsuit was filed on Tuesday and it alleged Choudhry subjected other women at the school to unwanted advances as well.