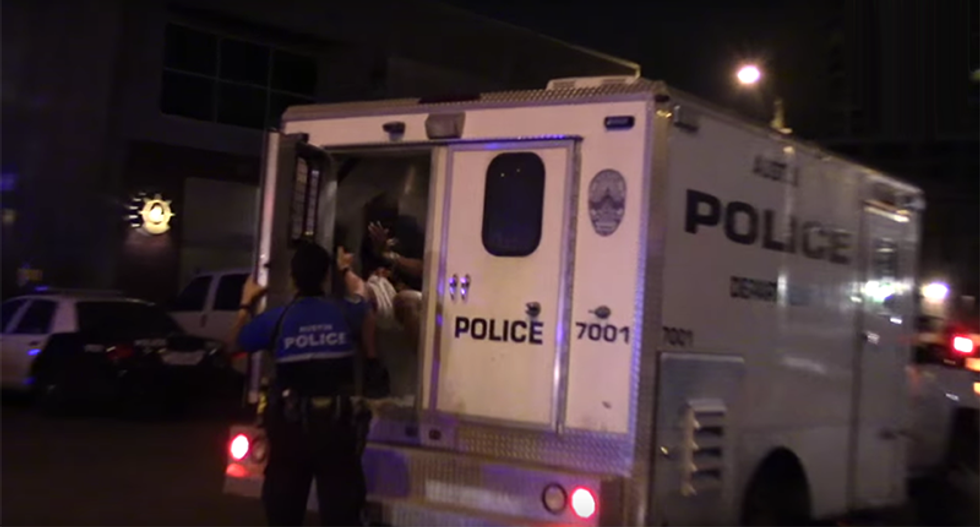 Early on in the video you can hear an officer tell individuals filming the incident "get out of the way" and the woman holding one camera saying "but we're not in the way" as she stands back behind officers on horseback and large trash dumpsters. The incident occurred during the 10-day long technology, music and film conference SXSW. The Peaceful Streets Project stepped up their efforts to film interactions with the police when the founder of the activist group noticed a lot of pepper spraying on behalf of the law enforcement.

“They’re treating pepper spray like a grand marshal treats candy at a parade, just throwing it out there like crazy,” Buehler said, according to the Free Thought Project.

An Austin Officer, later identified as Cameron Caldwell, closes the door to a police van while a man is inside. He then opens it again and yells at an unidentified black man inside to stop kicking the door. Caldwell opens the door a second time saying, “What did I tell you about kicking the door?”

The man inside says, “I didn’t do nothing.” Caldwell then sprays his face and body with pepper spray.

“What did I tell you about kicking the door? I told you,” Caldwell yells before closing the door once more.

“Wow, you asshole,” the woman recording the video yells. “I saw that, I got that on film, you abusive asshole.”

“Listen, we see these cops violating policy and committing crimes all the time, but usually there is some gray area that they like to dance (in),” Buehler said. “This was just crystal clear, there is no way by law or policy that what this guy did was acceptable. There is zero gray area.”

Watch the full video of the incident below: