Watch: Donald Trump snarls at Jake Tapper after he pleads with him to stop 'inciting violence' 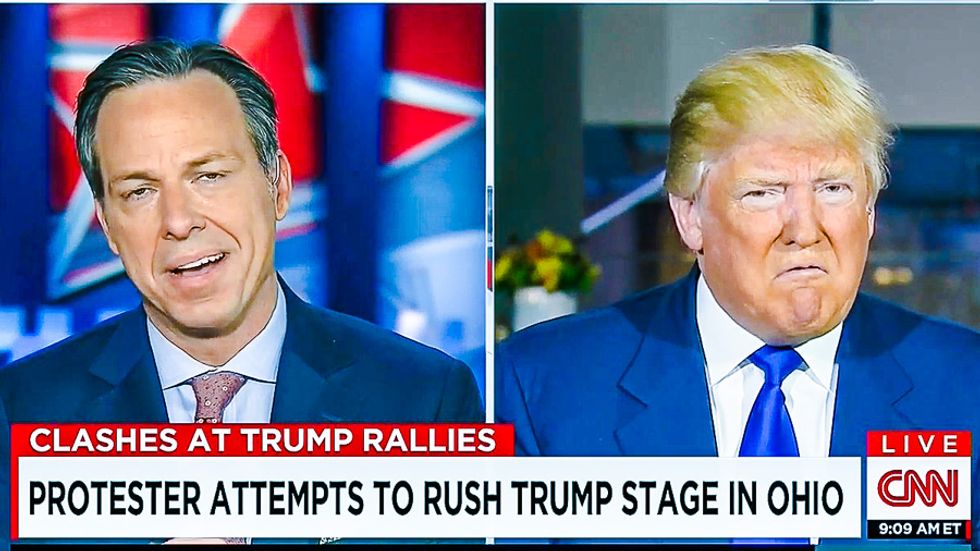 CNN host Jake Tapper pleaded with Donald Trump on Sunday to turn down the temperature by calling for his supporters to stop reacting violently to protesters.

During an interview on CNN's State of the Union, Tapper noted that every presidential candidate had accused Trump of "inciting violence."

"Do you ever consider whether you should be trying to lower the temperature?" Tapper asked.

The billionaire candidate, however, defended comments he made about wanting to "punch" protesters, saying that many of them were "crazed."

"People are getting hurt and people are actually concerned that somebody might get seriously, seriously injured," Tapper pleaded. "You are not taking down the temperature. You are, in the views of many of your fellow Republicans, making things worse, inciting, encouraging violence. And you're a leader, sir. You're the front-runner in the Republican Party."

"Excuse me, excuse me," Trump interrupted. "My fellow Republicans are running against me, they are losing big league."

Trump insisted that "zero" people had been injured at his rallies, ignoring that officers and protesters had reported injuries.

Tapper eventually ran out of time and made one final pitch for Trump to stop fomenting violence.

"I would just ask as a fellow American if you could consider whether or not dialing down the temperature, might be a healthier thing, both for your campaign and for the nation the nation at large," Tapper said. "But that's all the time we have."

"Well, you should report it right because we've had no injuries at my events," Trump shot back. "So, you know, do what you have to do."

Update: An error in the transcript was corrected. Donald Trump said that his opponents were "losing big league."