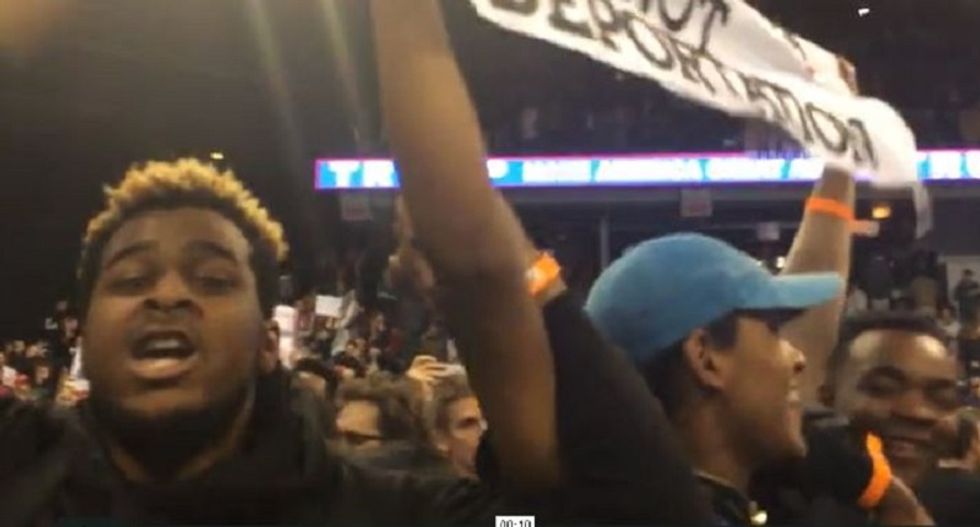 Instead of the Trump rally at UIC Pavilion going as planned Friday evening, thousands of protesters went undercover, posing as Trump supporters to gain entrance and blindsiding those thousands who were excited to see their candidate speak.

Earlier, crowds on both sides were peaceful. With a line wrapped around the block, Trump supporters streamed into the UIC Pavilion when the doors opened at 3 p.m. The UIC campus was crawling with media and police. Trump supporters either turned their backs to the media or faced them openly, wanting to be on camera.

Across the street and behind a wall of protesters, the American flag was flying at half staff. A man stood underneath, holding a white sign with big, black letters bearing the words, “I only look illegal.”

That image seemed to foreshadow what would follow at the rally. Trump fans started getting impatient around 6:30 p.m., half an hour after Trump’s scheduled start time. A voice came over the loudspeaker from a spokesman at the podium: “Donald Trump’s rally will be postponed until another date. Thank you very much for your attendance, and please go in peace.” Trump later said he postponed the appearance because of safety concerns, saying he didn’t want anyone to get hurt.

Half way between the stage and the press “pen,” in which media were contained, a group of UIC students immediately started celebrating. A band of Trump supporters rushed over, sparking confrontation and ripping their signs to shreds to throw at protesters. Scraps of paper and empty water glasses littered the floor where hundreds of excited Trump supporters had stood. Many of them left soon after hearing the announcement, rather than staying for the protest-turned-celebration.

Police swarmed the floor of the arena, hauling out agitated Trump supporters and overzealous protesters. The crowd kept up a steady stream of chants punctuated by outbreaks of song, expressing their elation for running Trump out of town.

The fact that it was Chicago, protesters said, made all the difference.

“We have a large city with a diverse people who understand systemic oppression,” said Tess King a student at Shimer College in Bronzeville. “I think it says something about our city.” The Chicago activists were proud, and felt they were making a national statement, King said.

Like many of the protesters in attendance, King supports Democratic U.S. Sen. Bernie Sanders of Vermont for president. At times, in the midst of the mayhem, the protest could be mistaken for a Bernie rally.

To some it was a party, to others, a crushing disappointment and a huge blow to their candidate’s image.

Police blocked rally-goers from protesters in an effort to keep the crowd inside under control, but confrontation abounded. There was considerable backup on hand, police said, in anticipation of some kind of disturbance.

Despite all the precautions, it took police almost an hour to clear the arena, and when they did, protesters took to the streets, joining others who had set up shop across from the venue.

Brandon Bellanger, a Trump supporter from Villa Park, was kicked out of the rally before it was officially cancelled. Bellanger said protesters were testing his patience, so he stood up to confront them and was promptly escorted out. He waited outside by the curb. “Any protest is a good protest in my mind,” Bellanger said. “It exercises your constitutional right.”

Bellanger was calm, but bridled when baited by passersby. When asked if other Trump supporters were out there with him, his friends chimed in, “Not as many as we’d like.”

Watch video of the celebratory protesters, as posted online, here: