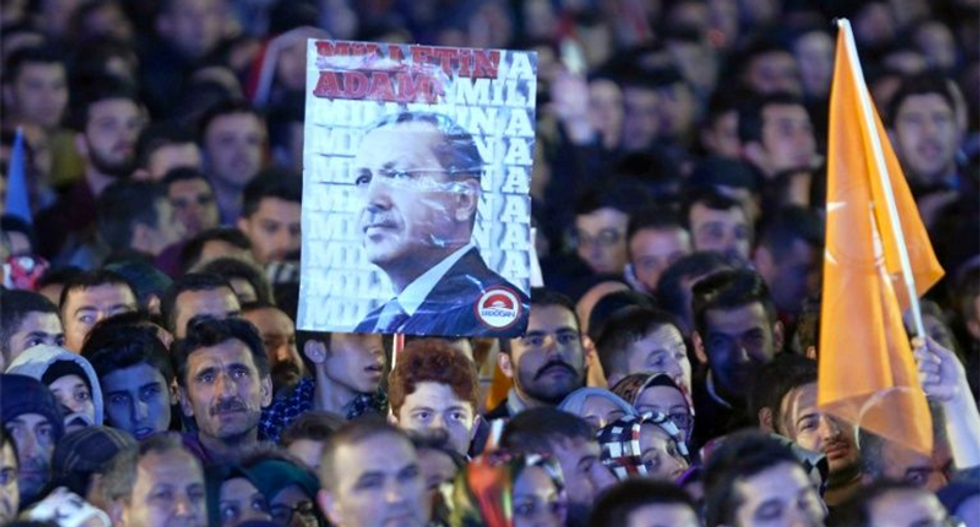 Supporters of President Recep Tayyip Erdogan have created a viral Twitter hashtag #WeLoveErdogan to rally around the Turkish leader as he makes a highly sensitive visit to the United States and faces growing criticism over freedom of expression.

The English-language hashtag, which was tweeted by several cabinet ministers and ruling party members, was propelled late Tuesday into the top trending worldwide hashtags on Twitter.

"Our president Mr @RT_Erdogan was greeted with great enthusiasm by US citizens and our compatriots," tweeted Foreign Minister Mevlut Cavusolgu, who is accompanying Erdogan on his visit to Washington.

Other users posted pictures of Erdogan kissing children or famous moments from his career and life, including scoring a goal with a canny chip in a televised 2014 football match.

Ruling Justice and Development Party (AKP) MP Mehmet Babaoglu posted a picture of Erdogan's famous 2009 walk-out from the World Economic Forum in Davos after a row with then Israeli president Shimon Peres.

"That's why #WeLoveErdogan," he said.

But the campaign hit immediate controversy with Erdogan supporters accusing Twitter of censorship by deliberately removing the hashtag from its top trending tweets.

In an extraordinary broadside of over 40 tweets in his Turkish and English accounts, Ankara mayor Melih Gokcek said Twitter had deliberately taken it down.

"This hashtag #WeLoveErdogan got TT ranking worldwide... But then it was censored unbelievably," said Gokcek, accusing supporters of Erdogan's arch foe the US-based preacher Fethullah Gulen of being behind its removal.

Other bloggers suggested that rather than censoring the hashtag Twitter may have removed it for being generated by automated bots or simply as a normal outcome of its complex algorithm for determining top trends. There was no immediate comment from the social network.

The Twitter campaign comes during an intense period for Erdogan as he visits the United States amid suggestions US President Barack Obama is trying to keep his distance from the Turkish leader.

Meanwhile foreign criticism is also multiplying over freedom of expression, with in the latest row Turkey asking Germany to take down a television song that lampooned Erdogan.

Until last year, Erdogan was seen as hostile to Twitter, boasting he does not "tweet or schmeet" and overseeing blockages of social networks.