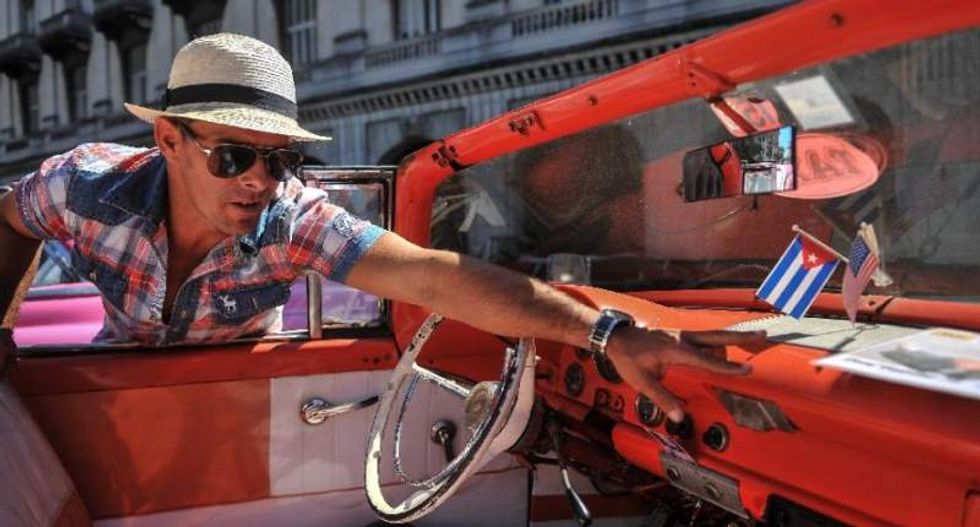 The White House on Tuesday opened the door wide for Americans to visit Cuba, even as tourism remains officially banned on the eve of President Barack Obama's historic visit to the communist island.

The Obama administration declared that Americans could visit the island freely for "individual people-to-people educational travel," chipping away at the nation's five-decade-old embargo on Cuba, which Congress has refused to repeal.

No longer will travelers have to go with an organized group, as required under recent rules. New guidelines issued by the Treasury Department are broad enough to permit many kinds of tourism. They mainly require "meaningful interaction between the traveler and individuals in Cuba" and "support for the Cuban people."

"There are many different ways that Americans can engage the Cuban people in meaningful exchanges while they are traveling to Cuba," Ben Rhodes, Obama's deputy national security advisor, told journalists.

"There's no shortage of opportunities for Americans to build that type of meaningful schedule of people-to-people engagement while they go to Cuba."

Andrea Gacki, acting deputy director of the Treasury's sanctions-enforcing Office of Foreign Assets Control, said the government had laid down broad recommendations for how people can meet the requirement of "a full-time schedule of meaningful activities."

But, she added: "We do have confidence that individuals will be able to come up with ways to engage with the Cuban people in ways that are more affordable and less expensive than having to rely on an organization to put together a program."

The move, along with other actions to open up opportunities for more business and "non-tourism" engagement with the island, came ahead of President Obama's trip to Cuba on March 20-22, a momentous capstone to the rapprochement that he and President Raul Castro announced in December 2014.

The new actions will allow US banks to provide more services for business and investment with Cuba, and US companies to work more freely there.

They also will allow US companies to hire Cubans for work inside the United States, which could pave the way for the rich US Major League Baseball league to hire Cuban baseball stars directly.

In the past, many Cubans wanting to play in the United States had to abandon their homeland.

"This is going to give important benefits to Cuban nationals looking to live and work in the United States without forcing them to make the decision to defect," said Gacki.

The various steps announced by the Treasury add up to the continuing erosion of Congress-mandated restrictions on interactions with Cuba and Cubans as the Obama administration seeks to end the decades-old embargo on the country.

"Consistent with existing law, we are doing what we can to support a greater engagement," said Rhodes.

"At the same time, we believe that the best way to support a better life for the Cuban people would be through lifting the embargo and the travel ban that have not succeeded bringing change to the lives of the Cuban people."

From the 1960s until a just over a year ago, Americans were mostly banned from tourism, trade and investment with the island barely 90 miles (145 kilometers) south of Florida.

Underpinning the expected expansion of travel was the signing in February of a bilateral agreement authorizing daily US commercial flights to the island for the first time in more than 50 years.

Several leading US airlines which already operate charter flights to Cuba say they are ready to start up scheduled services.

In another landmark, US-Cuba direct mail service will be reestablished Wednesday for the first time in more than a half-century, with the first direct mail flight, the Cuban postal service announced.

Since the 1960s, mail has moved through third countries.