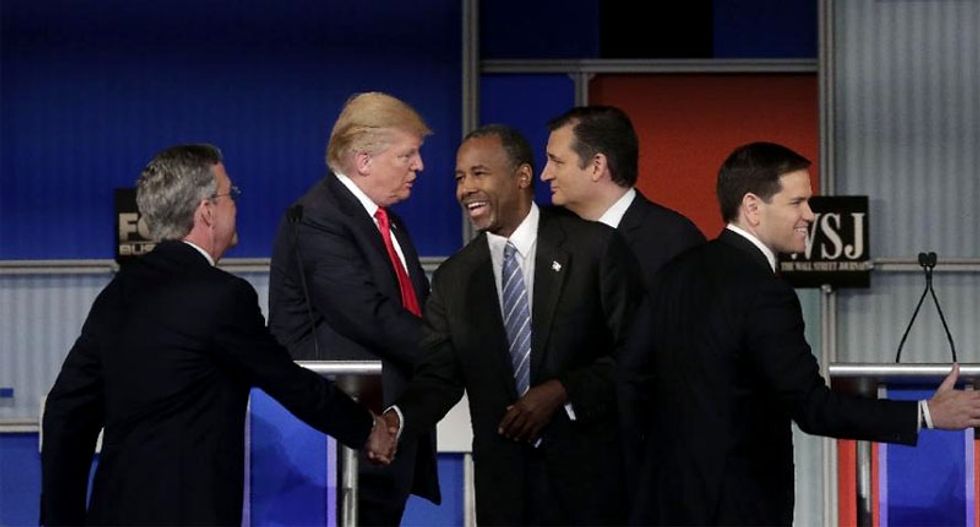 The strangest and most volatile presidential race in modern history got even more unpredictable on Tuesday night.

On the Republican side, Donald Trump overcame a relentless wave of establishment attacks to win Mississippi, Michigan and Hawaii by large margins. Trump’s only defeat of the night was by Ted Cruz in the Idaho caucuses.

On the Democratic side, Bernie Sanders proved the polls and pundits wrong by narrowly edging out Hillary Clinton in Michigan. Equally important, however, Clinton won a landslide victory over Sanders in Mississippi.

So what does it all say about the state of the 2016 presidential race? Here are the four most important takeaways from Tuesday’s vote:

Trump’s victories on Tuesday night were extremely impressive. He won Michigan by 12 percentage points, Mississippi by 11 points, and Hawaii by nine. The only contest he lost — Idaho — was one in which he had no campaign organization and made no effort to win.

As a result, Trump has nearly a 100-delegate lead over his rivals.

Just a few days ago, Trump seemed to be losing steam, particularly after his opponents aired a series of television attack ads in key states. The attacks focused on Trump’s business record, such as the fraud lawsuits that surround Trump University and the billionaire’s four bankruptcies. The 2012 GOP nominee Mitt Romney piled on by calling Trump a phony and a fraud who would likely lose to Hillary Clinton in the general election.

But none of the attacks on Trump worked.

Trump’s crushing victories in Mississippi and Michigan were striking because they once again demonstrated his broad appeal to all segments and all regions of the Republican electorate. He won evangelicals, working-class voters, and college graduates, just as he has in previous primaries. He also once again showed great geographical range, winning in the Deep South and in the heart of the industrial Midwest. By any conventional measure, Trump is a truly national candidate, at least among Republican voters.

Trump’s victories on Tuesday dealt a body blow to the campaigns of Marco Rubio and John Kasich. Rubio finished at or near the bottom in every race and Kasich performed far worse than expected in Michigan, a Midwestern state he should have won. Consequently, Rubio’s campaign is on the verge of collapse and Kasich’s may not be far behind.

And although Ted Cruz’s victory in Idaho keeps his campaign viable, his victories have largely been confined to southern states and small caucus states. At this point, Cruz does not look like a national candidate.

The simple fact is the only candidate in the race who has broad support among all wings of the Republican Party is Donald Trump.

On the Democratic side, Sanders barely won Michigan, carrying the state over Clinton by a margin of 49.8 percent to 48.3 percent.

But despite the narrow margin, it was an extremely impressive victory for Sanders. Michigan is a big state with demographics that resemble the nation as a whole. By winning in Michigan, Sanders showed that he has much broader appeal in the Democratic party than many pundits, including me, believed.

Sanders’ win also represented one of the biggest comeback victories of the year. On the eve of the Michigan primary, Sanders trailed Clinton in the state’s polls by 20 points. But on election day, Sanders beat Clinton by about 19,000 votes, a tremendous come-from-behind victory.

How did he do it?

The key to the Vermont senator’s success in Michigan was his focus on protectionist trade policies. Heavily dependent on the auto industry and manufacturing, Michigan has been hit hard by job losses to foreign competition.

Michigan’s painful economic history made it ripe territory for the protectionist messages of Trump and Sanders. In rhetoric strikingly similar to that employed by Trump, Sanders focused his efforts in Michigan on angry and bitter condemnations of international trade agreements. His passionate defense of protectionist policies clearly resonated with Michigan voters.

The success of Sanders’ anti-trade message will likely carry over into other Midwestern manufacturing states, like Ohio, Illinois, Missouri, and Wisconsin. Michigan demonstrates there are many more states available for Sanders to win if he focuses on trade and jobs.

Without question, Sanders had a great showing in Michigan. And yet he still has little chance of winning the nomination.

How can that be?

The fundamental problem facing Sanders is the Democratic Party’s delegate awards process. Unlike the Republicans, the Democrats have no “winner-take-all” states. The delegates from every Democratic primary and caucus are awarded on a proportional basis. Consequently, once a candidate races out to a big delegate lead, it is exceedingly difficult for others to catch up.

Even if Sanders wins a majority of Democratic voters from here on out, it is highly unlikely that he can overtake Clinton. The reason is the proportional delegate award system. To catch Clinton, he would need to win landslide victories in most of the remaining states. Indeed, he would need to win states like Ohio, llinois, New York, and California by the same margin as Clinton won Mississippi on Tuesday night. That is the only way he can make up the difference in the delegate totals.

But close wins like Michigan won’t do it for him.

On Tuesday night, Sanders won 65 of Michigan’s delegates and Clinton won 58. No matter how many states Sanders wins between now and July, coming away with 7-delegate victory margins won’t be enough to deny Clinton the nomination. He needs to win by blowout margins to change the dynamics of the race and overcome the delegate math that is stacked against him.

4. Circle March 15 on your calendar

Everything now rests on the March 15 primaries of Florida, Ohio, Illinois, Missouri, and North Carolina.

Starting on March 15, many of the states on the GOP primary calendar become “winner-take-all,” which means whoever finishes in first takes all the state’s delegates. Up until now, all of the Republican contests have awarded delegates on a proportional basis. But that changes on March 15 with delegate-rich Florida and Ohio, both of which are winner-take-all states.

Winner-take-all states are crucial to Trump’s path to the nomination because so far he has been winning primaries with an average of about 35 to 40 percent of the vote. In winner-take-all states, Trump will get 100 percent of the delegates even if he wins with only 35 percent of the vote. Thus, if Trump wins both Florida and Ohio, it will be extremely difficult for his opponents to stop him from winning the 1,237 delegates he needs to clinch the GOP nomination before the Cleveland convention in mid-July.

On the Democratic side, Sanders has a real chance to win Ohio, Illinois, and Missouri on March 15. But in light of her immense strength among minority voters, Clinton is highly likely to win North Carolina and Florida.

Therefore, in order to get back in the race, Sanders needs to win states by huge margins. If he wins blowout victories on March 15, particularly in states he is not expected to win, then all bets are off. If he doesn’t, any chance Sanders has of winning the nomination will be over.

The bottom line is March 15 looms as a momentous date on the 2016 presidential race calendar.