Witness spots NYPD using 'body bag' on handcuffed detainee: 'What the f*ck is that?' 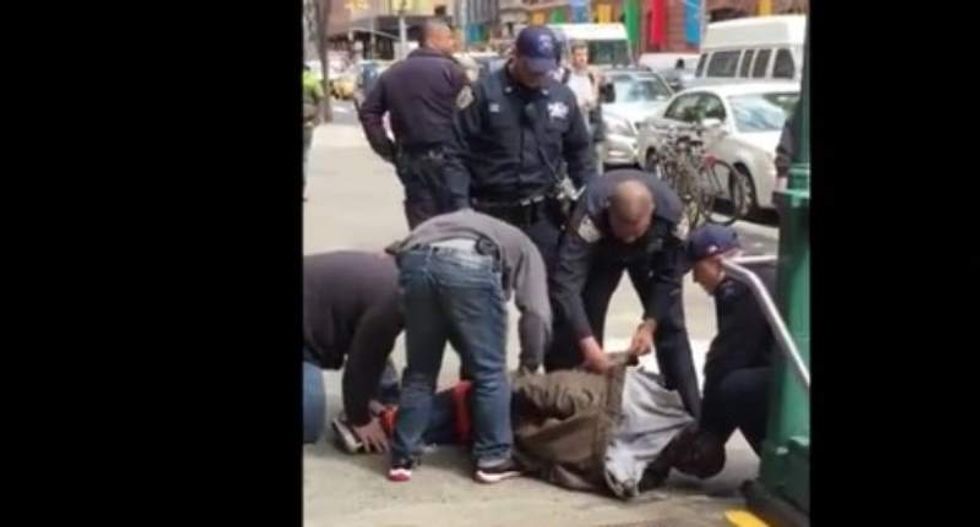 A New York City man filmed his distraught response to the sight of local police putting a man inside what he described as a "body bag" after handcuffing him.

"I don't have a problem with law enforcement and I very much support the NYPD on the whole," the videographer told Gothamist. "But I do have a problem with inhumane tactics and from what I could tell this mad was being treated like an animal...not a human being."

The video, posted on Thursday, shows a group of officers wrapping the detainee up in what's referred to as an "EDP bag," short for "Emotionally Disturbed Person." The videographer states that the person, seen laying on the ground, had already been hit with mace on top of being handcuffed.

"There is quite literally a live human being f*cking trying to move," he says. "What the f*ck is that?"

The bag was also placed over the unidentified person's head, which the videographer -- who identified himself only as Mike -- described as "the craziest sh*t I've ever seen done to somebody in my whole f*cking life."

According to Gothamist, EDP bags were designed for use by the NYPD's Emergency Service Unit. A department spokesperson said that they are ventilated, allowing detainees to breathe. Officers are instructed to use them "when an EDP is violent and may cause harm to themselves or others."

However, two sources Gothamist contacted -- a psychiatric emergency room worker and local attorney David Rankin, who has pursued police misconduct cases in the past -- both questioned placing the bag above the detainee's head in the incident Mike filmed.

"It is not something I have heard of happening before," said Rankin. "It does seem odd."

Watch the incident, as posted online, below.