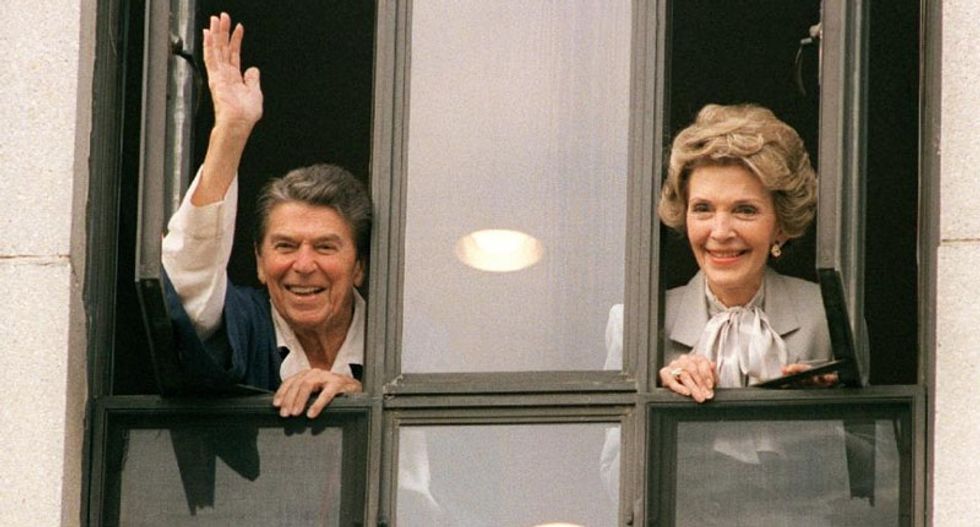 US President Ronald Reagan (L) waves to the press from the window of his room at Bethesda Naval Hospital with First Lady Nancy Reagan on January 6, 1987 (AFP Photo/Mike Sargent)

Nancy Reagan's death sparked an outpouring of condolences from around the world Sunday for the former US first lady.

Here are reactions of some of the main public figures who made official statements or took to social media to voice their sympathies.

"I am saddened by the passing of my stepmother Nancy Reagan... She is once again with the man she loved. God Bless...

"Nancy is where she has always wanted to be with her Ronnie... Now she is at peace."

"Mrs Reagan was fiercely loyal to her beloved husband, and that devotion was matched only by her devotion to our country. Her influence on the White House was complete and lasting."

"Nancy Reagan was one of my heroes. She served as first lady with unbelievable power, class and grace and left her mark on the world.

"She's with her Ronnie now, but those of us she left behind will miss her dearly."

"Nancy Reagan was an example to us all of graciousness, loyalty and dignity in good times and bad. She was an exemplary first lady, and a generous friend.

"I will always be grateful for her and her husband's many kindnesses to my family. And I will always remember her as a dear friend and patriot and as one half of a love story that Hollywood couldn't have written any better."

"Nancy Reagan, the wife of a truly great president, was an amazing woman. She will be missed!"

Marco Rubio, another candidate vying to be the GOP's presidential nominee:

"Today our nation mourns the loss of Nancy Reagan, a true example of integrity and grace. My prayers are with the entire Reagan family."

US President Barack Obama and his wife Michelle:

"We remain grateful for Nancy Reagan's life, thankful for her guidance and prayerful that she and her beloved husband are together again."

"Nancy was an extraordinary woman: a gracious first lady, proud mother and devoted wife to President Reagan -- her Ronnie.

"Her strength of character was legendary, particularly when tested by the attempted assassination of the president, and throughout his battle with Alzheimer's."

"Nancy Reagan was an exemplary first lady. Even after her time in the White House, she was an outspoken advocate for stem-cell research to find a cure for Alzheimer's. Nancy Reagan had a good heart, and she will be dearly missed."

"Rosalynn and I are saddened by the passing of former First Lady Nancy Reagan. She will always be admired for her strength of conviction and her lifelong devotion to her husband."

"I remember Nancy as a noble woman who supported president Reagan and stood by his side. She will be remembered as a great friend of the State of Israel."

"#NancyReagan was some kind of gal! Warm & wonderful. Always had her husband's best interest. We'll miss you."

"Sad to hear Nancy Reagan passed away. She stood up for us in 1984 when we were banned from playing July 4 D.C. Show. Ended up being great."