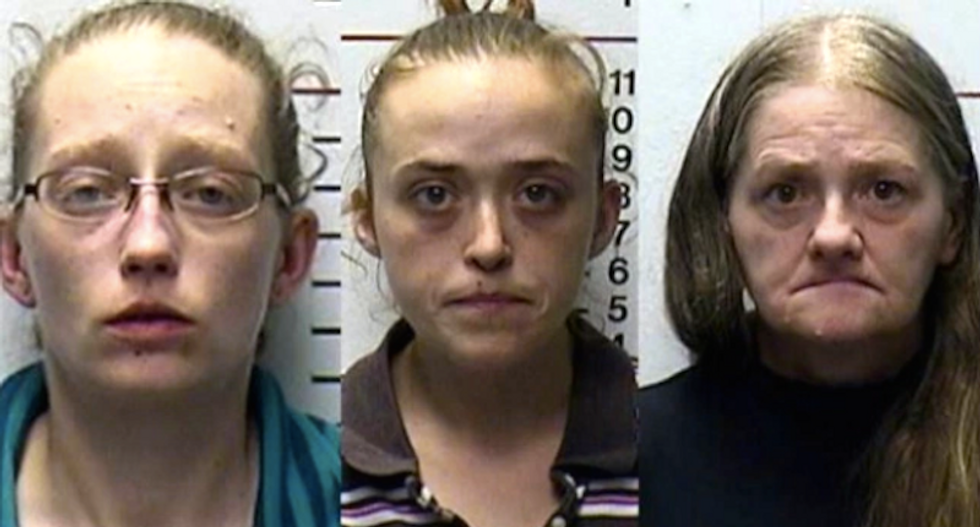 A 5-year-old boy died and his 6-year-old brother remains hospitalized after their mother and two other women brutally beat them for stealing food.

Police responded about 8 p.m. Wednesday to a motel in Middletown, Ohio, where a woman said the younger boy had died after slipping away from their campsite.

"We were camping in the woods, and he escaped the tent when we were sleeping, and he was gone for a couple days and some kids got ahold of him and messed him up real bad, and we didn't realize how bad it was," the woman told dispatchers.

When officers arrived at the Parkside Inn, they discovered the boy was still breathing -- but they found evidence of abuse so disturbing that first responders underwent counseling afterward.

"This was a horrific event," said Major Mark Hoffman, assistant chief of Middletown police. "It's the worst that I've seen, anybody on the scene has seen."

Police said the boys' mother, 26-year-old Theresa Hawkins-Stephens, and two other women wrapped the children in blankets and beat them over a 22-hour period inside the motel room after one of the boys stole some food.

"(It was) nothing short of torture," said one detective.

The women had come from Licking County seeking work, and they stayed for several days at a campsite near the Little Miami River, until a social services agency gave them a voucher to stay at the motel.

Police said they found no evidence of drugs at the campsite or motel.

Before her son's death, Hawkins-Stephens was charged with felonious assault and child endangering -- the same charges as her friend, 29-year-old Rachael Bostian, and her friend's mother, 56-year-old Ramona Bostian.

Hawkins-Stephens and Rachael Bostian were charged with murder after the boy died.