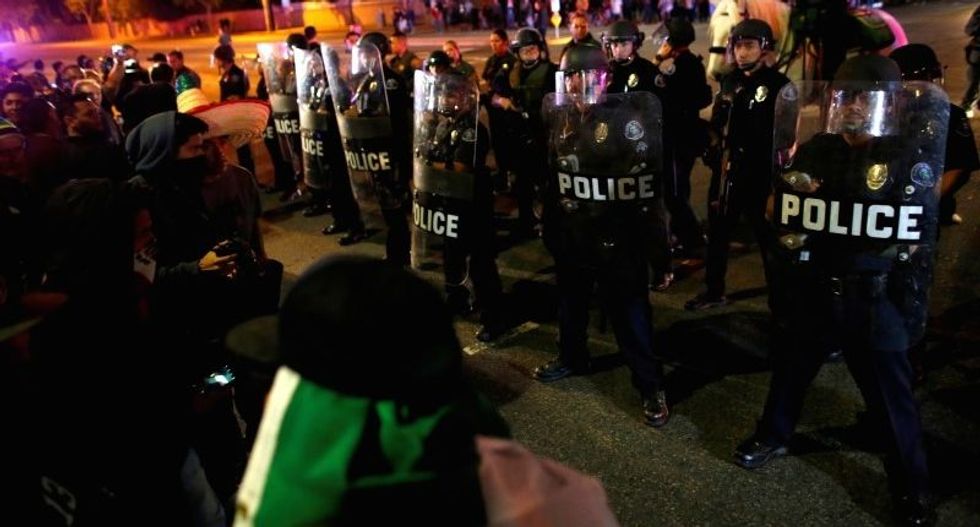 Some 20 demonstrators were arrested on Thursday outside a Donald Trump campaign rally in southern California, where the Republican presidential front-runner vowed to his supporters to get tough on illegal immigration if elected.

Demonstrators smashed the window of a police squad car, marched in protest and blocked traffic as police in riot gear tried to disperse the crowd outside of the county fair grounds in Costa Mesa, California, according to local media and the Twitter account of the Orange County Sheriff's Department.

The department said on its Twitter account that about 20 arrests were made and that no major injuries were reported.

Trump visited Costa Mesa, a city of more than 100,000 people, a third of whom are Hispanic or Latino, hoping to garner support in California where voters will go to the polls during the state's Republican primary on June 7.

A strong primary win in California for the billionaire could thrust him above the delegate count needed to secure the Republican nomination for president and avoid a contested party convention in July.

During the campaign stop on Thursday, Trump promised to get tough on illegal immigration by building a wall on the border between Mexico and the United States, a popular theme of his presidential campaign, suggesting that a wall would stop drugs from coming into this country.

"The drugs are poisoning our youth and a lot of other people and we are going to get it stopped," he said, telling the crowd that he would force Mexico to pay for the wall.

After the event, local news showed hundreds of demonstrators surrounding vehicles, waving Mexican flags and holding signs in protest of Trump outside of the Orange County Fair and Event Center. At least one demonstrator was shown jumping on the top of a police car while other demonstrators were seen shaking a police vehicle.

A Los Angeles Times reporter posted a photo on Twitter of a man wearing a Trump T-shirt with a bloodied face.

Trump has come under fire from rivals for fueling unrest with his rhetoric as several of his rallies around the country have been met by protests during the last several months.

(Reporting by Brendan O'Brien in Milwaukee)