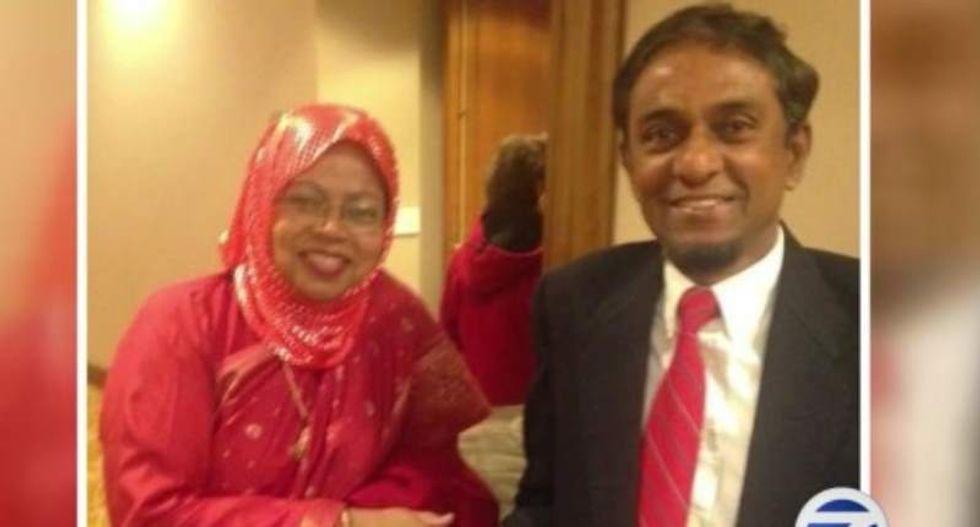 (L-R) Shamima and Golam Rabbi, who were found dead inside their home on Sunday. (KGO-TV)

Police in San Jose, California are investigating the murder of a local immigrant couple, whose bodies were allegedly found near a grisly message written in ink, KGO-TV reported.

Friends found 59-year-old Golam Rabbi and 57-year-old Shamima Rabbi dead inside their home on Sunday after failing to hear from them for days. The couple emigrated to the US from Bangladesh and lived near their local mosque, the Evergreen Islamic Center, for years.

"We are surprised that they are no longer with us," said a fellow center member, Hasan Rahim. "Especially going away in such a manner is something we just can't come to grips with."

Their two sons, ages 17 and 21, were not in the home at the time of their deaths. The San Jose Mercury News reported that, according to a relative, one of the two sons was taken in for questioning while the whereabouts of the other one are unknown.

Authorities have not confirmed KGO's report that a message saying, "Sorry, my first kill was clumsy" was found written in ink near the couple's bodies. KNTV-TV also reported that a "diatribe" was found written on a wall claiming that Shamima Rabbi begged for her life as she was being killed, concluding with the line, "I can’t love someone without telling them."

No motive has been identified for the two homicides, but police said each of the victims was shot to death. A friend of the couple told KNTV that Golam Rabbi kept guns in the home because he was a hunter.

Watch KGO's report, as aired on Monday, below.