Ariz. Del Taco 'boss' fired after profane rant: 'Why you gotta give me 'tude over the f*cking sauce?' 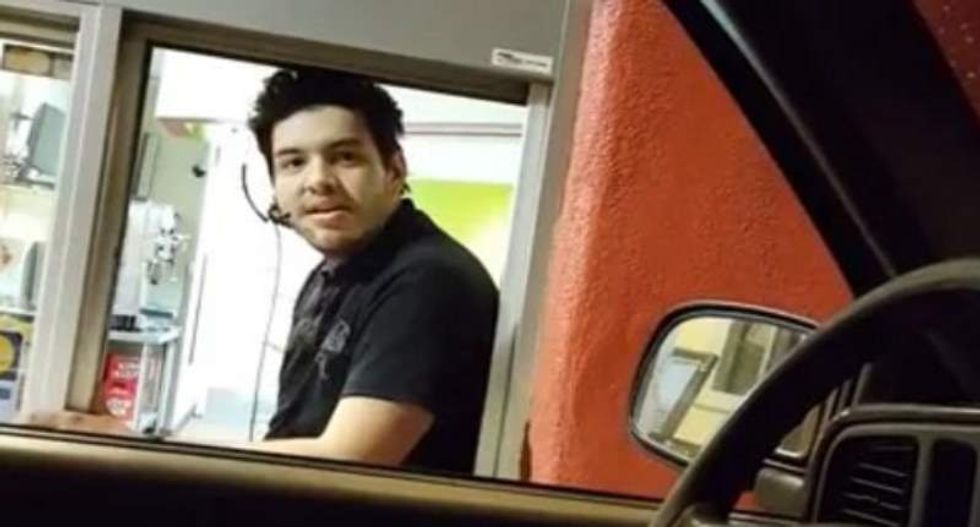 An unidentified Del Taco manager rants to two customers over their order. (KXNV-TV)

After boasting that nobody would see it, a Del Taco manager in Arizona was sacked after video of his hostile encounter with two customers was posted online, KXNV-TV reported.

The profanity-laden rant apparently came about after the customers pulled up to the drive-thru because their order was missing items and a lack of sauce for their food. As the driver explains that the unidentified manager called him "a f*cking d*ck," the manager can be seen in the background flipping him off.

A few seconds later, he comes to the window and says, "Hey bro, you want the whole story?" before telling the driver that he had "no information" about their order.

"You don't have to act that way," the woman filming the conversation replies.

"I don't give a f*ck, bro," the manager says before making fun of the customers, saying, "Where you gonna post it, YouTube? No one's gonna f*cking see it."

As KTVK-TV noted, it was actually posted to Vimeo, where the video amassed 90,000 views in three days and was named a "staff pick."

When the woman tells the manager that they would send the video to his boss, he replies, "I am the boss. My dad's actually the f*cking owner so good luck with that." Seconds later, he complains about his clientele and about the two customers.

"You got your sauces and you guys are still being b*tches," he says. "And I'm f*cking ticked off 'cause I still got orders."

"Why don't you quit?" the driver asks.

"Why would I quit?" the manager replies. "This is my f*cking fortune right here. You know what a pot of gold this is?"

The driver then points out that his order was missing items and that he returned to buy them.

"That's cool," the manager replies. "But why you gotta give me 'tude about the f*cking sauce, though?"

The conversation ends not long after that exchange, though the manager can be heard calling the driver a "f*cking dumb*ss" as he drives away.

Del Taco quickly confirmed the manager's termination in a statement.

"We strive to provide a positive guest experience at all of our restaurants and were appalled by this behavior as it is not representative of our high guest service standards," the company said. "We took this incident very seriously and addressed it with the location's franchisee, who took definitive action by terminating the employee immediately."

Watch KXNV's report, as aired on Friday, below.

The original video can be seen in its entirety here.