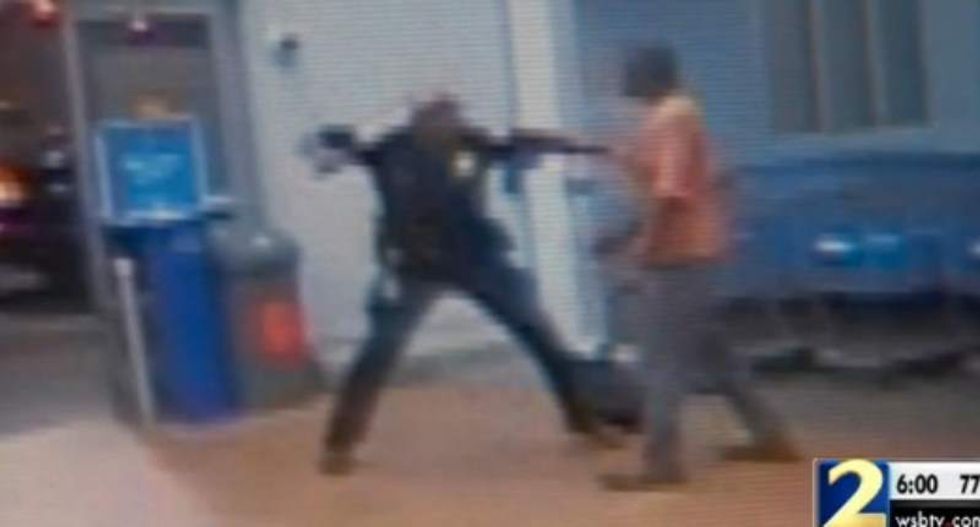 An Atlanta man is suing a local police officer for attacking him over a tomato inside a local Walmart, WSB-TV reported.

Security footage of the October 2014 encounter shows King approach Carnegay as he is walking out of the store. A manager accused Carnegay of stealing the tomato from the store. King quickly takes his baton out and begins hitting Carnegay, who does not retaliate. King continues to hit Carnegay after he goes to the ground. King, who was off-duty but providing security for the store, later found Carnegay's receipt for the tomato after reaching inside his pocket.

"The officer went into Robocop mode and beat the crap out of him," said Carnegay's attorney, Craig Jones.

Carnegay suffered two broken bones in his leg as well as a ruptured artery from the encounter, which required him to be hospitalized and have a titanium rod implanted in his leg. He also said he was handcuffed while in the hospital, though, because King "said I assaulted him and obstructed him from doing his job."

The Atlanta Journal-Constitution reported that Carnegay was jailed for three days after being charged with misdemeanor charges of simple battery against police and willful obstruction of law enforcement officers. The charges were later dropped.

Watch WSB's report, as aired on Monday, below.