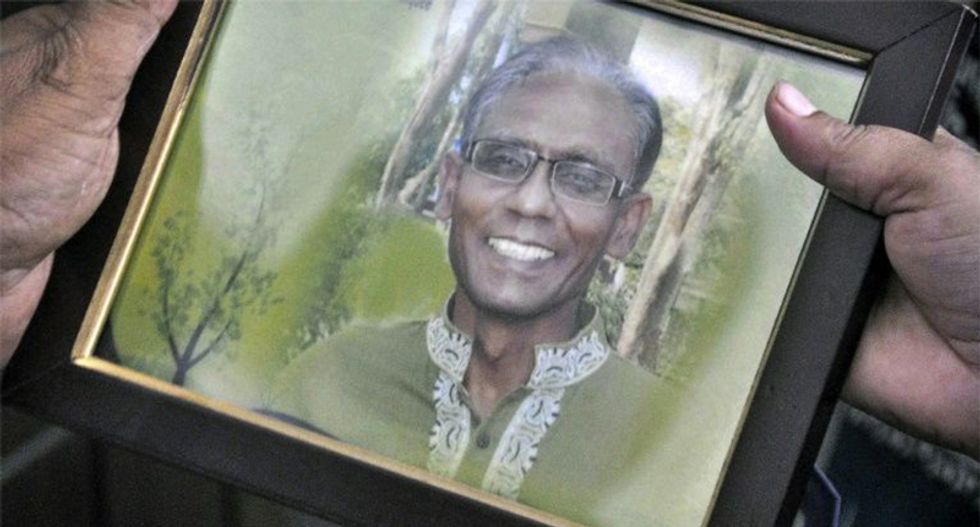 A man holds a portrait of Bangladeshi professor Rezaul Karim Siddique, who was hacked to death in Rajshahi (Photo: AFP)

Two people including a leading gay rights activist were hacked to death Monday at an apartment in the Bangladesh capital Dhaka, police said, the latest in a series of attacks on minorities in the Muslim-majority nation.

He did not identify the dead, but gay rights activists confirmed to AFP that one of them was an editor at Roopbaan, the country's only magazine for the LGBT community.

The United States ambassador to Bangladesh Marcia Bernicat condemned the killing, saying one of the victims was a Bangladeshi national working for the US embassy in Dhaka.

"I am devastated by the brutal murder of Xulhaz Mannan and another young Bangladeshi," she said.

"We abhor this senseless act of violence and urge the Government of Bangladesh in the strongest terms to apprehend the criminals behind these murders," she added.

The Roopbaan editor and some of his friends launched the magazine two years ago and were behind an annual Rainbow Rally which since 2014 has been held on April 14, Bengali New Year.

But police this year banned the rally as part of widespread security measures.

Law enforcers arrested and released four LGBT activists earlier this month after they tried to hold the rally.

Ahead of the banned event, the Roopbaan editor told AFP that they had received threats from Islamists, who posted messages online.

"They have even set up an online group to threaten us," he said.

The killings come two days after a liberal and free-thinking professor was hacked to death in the northwestern city of Rajshahi, the latest in a series of murders of secular bloggers and liberal activists that has left the country reeling.

The Islamic State group claimed responsibility for the attack through its news agency, saying the 58-year-old professor who wrote poetry and fiction had been slain for "calling for atheism".

But Bangladesh Home Minister Asaduzzaman Khan rejected the assertion and said "local militants" were responsible for the murder.

The IS group has in recent months claimed responsibility for the killing of Christians, Hindu priests and members of the minority Sufi, Ahmadi and Shiite faiths in Bangladesh.

The local branch of Al-Qaeda has also claimed the murders of secular bloggers and activists, including the killing this month of a 26-year-old atheist law student who had mocked Islam on his Facebook page.

Bangladesh police, however, said they suspect banned local Islamist outfits, the Jamayetul Mujahideen Bangladesh and the Ansarullah Bangla Team, of being behind the killings.

Also on Monday, Bangladesh's best-known blogger became the latest secular activist to be threatened with murder, a warning he suspected was linked to his recent scathing criticism of the government.

Blogger Imran Sarker, who led major protests by secular activists in 2013 against Islamist leaders, said he had received a phone call on Sunday warning he would be killed "very soon".

But Sarker claimed the threat was probably connected to his opposition to the government's alleged crackdown on dissent, rather than the offence he caused to Islamic extremists.

"A male voice called me Sunday evening and said I will be murdered very soon. He hung up as soon as I asked him where they would kill me," the 33-year-old told AFP.

The gay community has been heavily persecuted in Muslim-majority Bangladesh. But in recent years some activists have tried to increase awareness and rights.

Roopbaan has become a platform for promoting the rights of LGBT Bangladeshis, seeking to spread tolerance in a nation where same-sex relationships are a punishable offence.