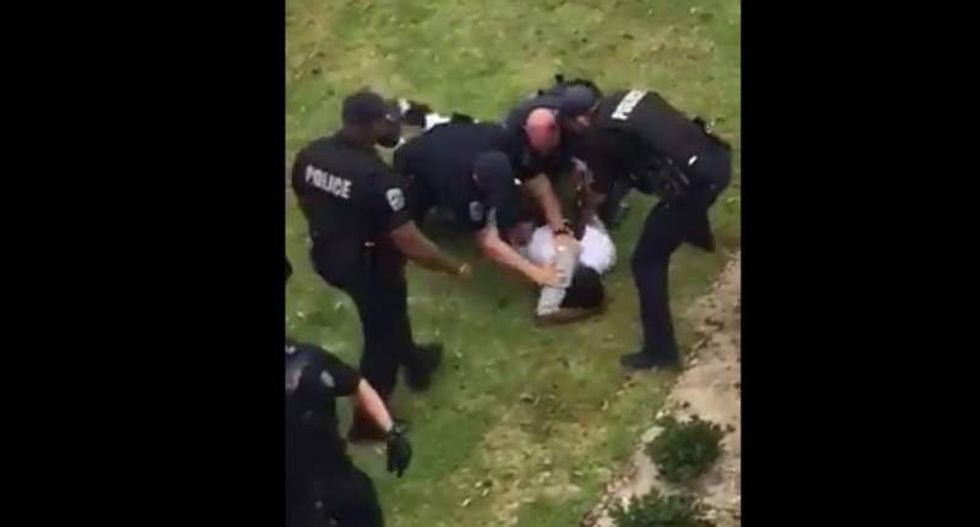 Police in Baton Rouge, Louisiana are investigating an apparent attack on a 16-year-old boy caught on video as he was being arrested, the Baton Rouge Advocate reported.

The footage shows a group of officers gathering around Ja'Colby Davis, who is on the ground face down as a white officer pummels him. As Davis puts an arm around his head to cover himself from the blows, another officer grabs the arm and handcuffs him.

Davis' mother, Danielle Todd, told The Rouge Collection that police were responding to a fight taking place near where he and his unidentified 14-year-old brother were standing during a local Earth Day event on Sunday. The younger sibling reportedly stated that Davis was thrown to the ground after asking an officer why they were "grabbing him that way" to get him away from the altercation.

"I feel like this shouldn’t happen to anyone's child," Todd said. "No parent should have to see a video of police officers beating their child for asking a question."

Police spokesperson Sgt. Don Coppola confirmed in a statement that Davis was the person seen in the video, telling the Advocate that he was charged with battery on a police officer and resisting a police officer with violence or force. However, he did not identify any specific accusations against Davis.

"While we cannot speak yet to the context in which this incident occurred, we can assure you that we are treating the situation with the utmost care and concern as we initiate an Internal Affairs Investigation," the statement read.

Police said that three other teen boys were arrested in connection to a shooting that took place after a fight during the event, but did not confirm whether that was the same fight that preceded Davis' arrest.

Watch the footage, as posted by The Rogue Collection, below.