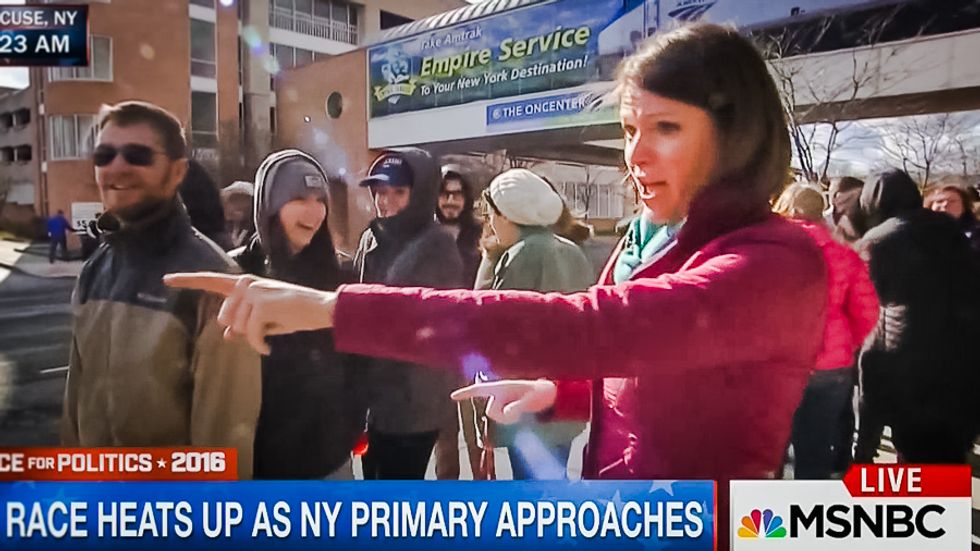 MSNBC's Kasie Hunt came up dry on Tuesday as she tried to prove supporters at a Bernie Sanders rally were not registered Democrats.

Reporting from outside a Sanders rally in Syracuse, Hunt noted that the massive crowd was lining up five hours in advance to see the candidate.

"Here's my question for you guys," Hunt said, addressing the Sanders supporters on live TV. "And this is going to be Bernie Sanders' main problem here in New York -- are y'all registered Democrats?"

As Hunt moved down the line, the answer again and again was "yes."

"Anyone not registered?" Hunt pleaded.

"I am registered!" one man volunteered.

"Alright, there you go," Hunt sighed. "I spent some time talking to people yesterday at another rally, and a lot of them are all set to go. But there is this issue with independent voters. If you didn't change your voter registration earlier this year, you're out of luck if you want to change it now and vote for Bernie Sanders."

"There is no same-day registration in the state," Seitz-Wald explained. "Independents or members of third parties who want to vote as Democrats had to change their party registration by October 9."