Bernie rips Cruz and Trump: You wouldn’t know NY values if they were 50-ft on Empire State 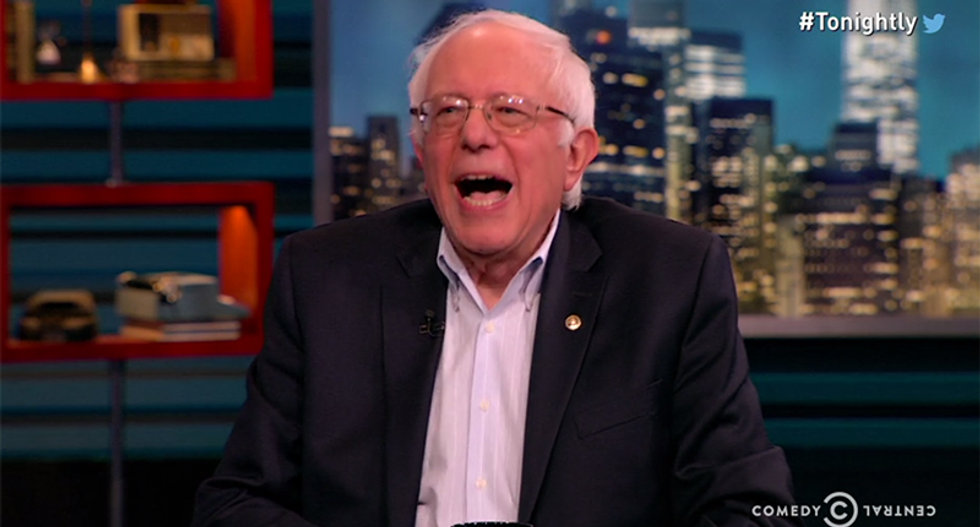 Wednesday's "Nightly Show" brought presidential candidate Bernie Sanders to New York — for both the state’s Democratic primary and an interview with Larry Wilmore.

"I have New York values," the Brooklyn native told the audience, mocking Ted Cruz's unfortunate debate comment. Sanders named off his issues from valuing a living wage over a minimum wage, a fair justice system and a government that works for all people, which Sanders said were New York values. He emphasized that New York was built by the work of immigrants and that Ted Cruz insinuating that New York values are a bad thing, "you insult my city, my state, my culture and my heritage."

In his interview, Sanders insisted the delegate math was on his side. The Vermont Senator has won eight out of the last 10 primary/caucus states and says that his opponent's stranglehold on the superdelegates will loosen when they see Sanders' campaign can be successful and viable.

"They're really, basically, party insiders," Wilmore said of the superdelegates. "And you're really positioning yourself as an outsider."

"You might say that, Larry, yes," Sanders joked. But when it comes to the so-called insiders, Sanders agrees that they all have a goal in common and that's making sure someone like Donald Trump or Ted Cruz doesn't become president. Sanders believes that they will look closer at which of the two (he or Clinton) is the stronger candidate to take the GOP nominee on and at that point he'll be victorious. "I'm doing much better than Secretary Clinton at getting independents involved and that's why I think I'm a stronger candidate."

Sanders is succeeding in states that are traditionally won by Democrats, and the states in which he is not performing well are states that Democrats don't win in November. Still, Sanders says that one day he believes progressives will be competitive in those states.

Wilmore cited Joe Scarborough who said this week on "Morning Joe" that he believes the Democratic primary system is rigged aginst Sanders. While Sanders refrained from using the word "rigged" he did say that having so many southern states earlier on, states that Democrats will never win in November, "distorts reality."

When Wilmore confronted Sanders with Bill O'Reilly's insult that Sanders was delusional if he thought he could break up the big banks. Sanders said doing so would be very simple by using Section 121 of the Dodd Frank Act or preferably through a bill Sanders authored that would give the Secretary of the Treasury the power to fix the problem. He's concerned that the banks that were "too big to fail" after the crash are larger now than they were in 2008 and together the assets of these banks make up 58 percent of American GDP. "I think that's too much political and economic power in too few hands. I do believe they should be broken up," Sanders said.

Sanders went on to compare the corruption on Wall Street with a kid who gets caught with marijuana and his life is ruined, whereas a Wall Street company literally destroyed the country's economy and no one is behind bars. "That's gotta change," Sanders said.

Wilmore cited Sanders' work in carpentry, his Jewish faith, his ability to draw a crowd to hear his speeches and the upcoming trip to meet the pope and asked if Sanders was actually Jesus. He laughed the question off but said that he was excited to visit the pope, as Francis has done so much in the fight for social and economic justice not to mention his work on the environment.