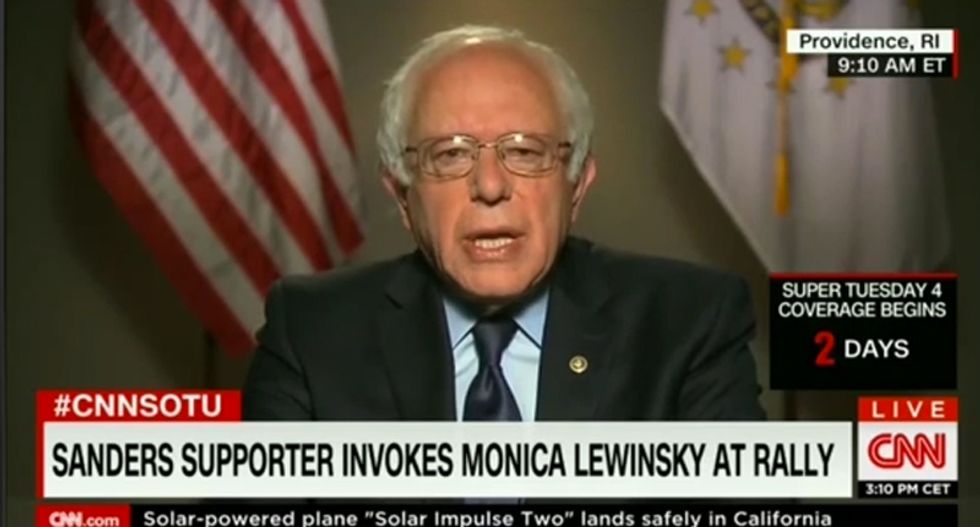 Vermont Senator Bernie Sanders was put on the spot Sunday morning when pressed about actress Rosario Dawson's comments about Monica Lewinsky before she introduced Sanders to a Wilmington, Delaware crowd.

Saturday night, Dawson raised Democratic hackles with a jab at former Secretary of State Hillary Clinton's campaign, saying: "We are literally under attack — not just for supporting the other candidate. I’m with Monica Lewinsky on this … bullying is bad."

The comment, coming from out of nowhere, became bigger news than Sanders' speech to the crowd and the Vermont senator was forced to address it when speaking with CNN host Jake Tapper.

"We have many many --- Rosario is a great actress and she’s doing a great job for us," Sanders parried, saying she has help increase voter turnout.

"What our job, right now, is to contrast our views compared to Secretary Clinton. That's what a campaign is about," he continued before adding campaigns shouldn't be about "personal attacks."

Tapper didn't let the senator off the hook, asking, "But, yes or no.  Should your surrogates be talking about Monica Lewinsky?"

Sanders paused before stating, "I have no idea in what context Rosario is talking about, but I would hope that all of our people talk about the real issues.”