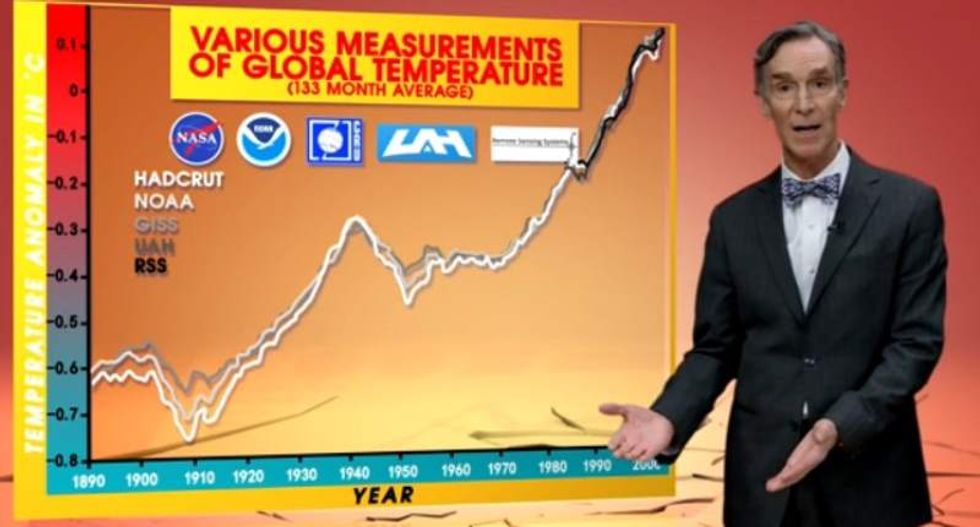 "Come on, champ -- show us how tough you are," Nye said sarcastically in his response, shot in the style of a TV weather segment.

Late last year, Bastardi accused Nye of taking on "increasingly shrill tones" regarding climate change since the two debated the issue on Fox News in 2010.

He also accused Nye of trying to "isolate, demonize and destroy" anyone who disagreed with him, comparing him to Saul Alinsky, the community organizer who is a preferred target for conservatives. Bastardi challenged Nye to explain what he called the lack of a connection between global temperatures and carbon dioxide levels, as well as a decline in temperatures following an El Niño weather event in 2006-2007.

Finally, he dared Nye to give his own forecast for global temperatures by 2020.

Nye responded by pointing out that Bastardi's carbon-dioxide models were based on the atmosphere during prehistoric eras, when there were "no living things producing oxygen," as well as a difference in the Sun's brightness.

The TV host and Planetary Society CEO also pointed out that Bastardi has appeared at events hosted by the American Coal Council, the Nebraska Propane Gas Association, and the North American Gas Forum.

"Where you speak is your business. But it also seems to be your business -- telling your audience what they want to hear," Nye said.

He then issued the same two challenges to Bastardi that he did to Climate Depot founder Marc Morano, saying he would bet $10,000 that not only would 2016 be ranked among the top 10 years ever, but that the decade between 2010 and 2020 would go down as the hottest decade recorded to that point.