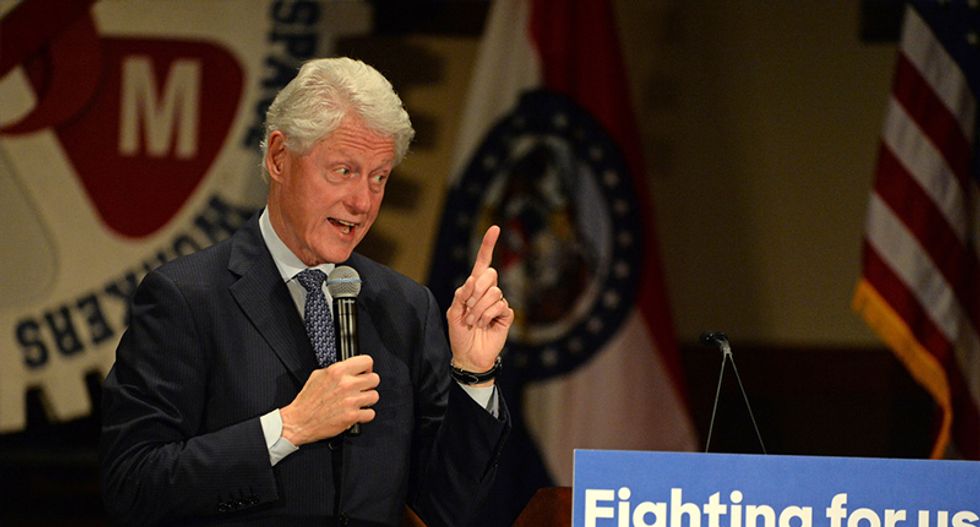 When #BlackLivesMatter protesters took to the stage during Netroots Nation disrupting Martin O'Malley's and Bernie Sanders' interviews many of the largely white rally attendees weren't happy. They were there to see O'Malley and Sanders answer intense questions on policy issues. When protesters at Donald Trump rallies dare to raise a sign or their voice in dissent, violence is generally the result. But last week proved that Hillary Clinton supporters, including former President Bill Clinton, are not immune to hostility for #BlackLivesMatter.

Rufus Farmer and Erica Mines were the two that were at the Philadelphia rally demanding answers from Clinton on policing, mass incarceration and the 1995 Clinton Crime Bill. The intention was to protest at the rally but stand silently with their signs. They didn't go in to cause trouble much less incite mob violence much less draw the ire of a former president. Their reception from the crowd of Clinton supporters wasn't a Trump-punch in the face, but it wasn't a gracious welcome either. According to an interview with Chauncey Devega there were a lot of unwanted hands being placed on them in the crowd.

"There was a lot going on in a physical manner. People were approaching Erica and putting their hands on her," Farmer described. "I didn’t really take it all in, Clinton’s retort, until we started watching more of the video footage from the event, seeing him pointing his finger, getting red in the face, making these wild accusations toward us. I was focusing more on my own safety, and of course Erica’s safety, and what was going on around us in that room."

Mines acknowledged that protesters are always going to be seen as "the other" in a crowd of whatever supporters are attending a rally, but it isn't the protesters that have been the violent ones. "Bill Clinton was not the only person wagging their finger in the building that day," Maines said. "The actual confrontation started when a white lady came up to me and told me that I needed to be ashamed of myself for disrupting the event. You also have black liberals and gatekeepers who are taunting you and going along with the chastisement."

"There were actually black men standing in front of me as a black woman as if my concerns about police brutality and violence did not impact them as well," continued Mines.

Farmer disclosed that another African-American person called him a "demon" after the rally had ended. Maines revealed another woman used the word "predators" to describe the two.

"It was him chastising us because we are the 'uncivilized people,' the black 'barbarians' and if it wasn’t for what he did with the 1995 Crime Bill then we would be worse off than where we are today," Maines continued. "In that moment, he revealed himself and his true thoughts on black people. He likely had lots to do with his wife calling us “super predators” and that “we need to be brought to heel” like we were animals."

The two don't give Clinton opponent Bernie Sanders a pass either. While he might mean well, "I do not think he understands how to improve the conditions in our communities" Farmer concluded. "He needs to hire folks who are on the ground and who have their ears to the street regarding what is going in these communities on a daily basis. This is not just police brutality; it is gentrification; it is a lack of funds for school systems and other matters too."