Bundy cattle may be starving after overgrazing: ‘Cliven’s management practices leave a lot to be desired’ 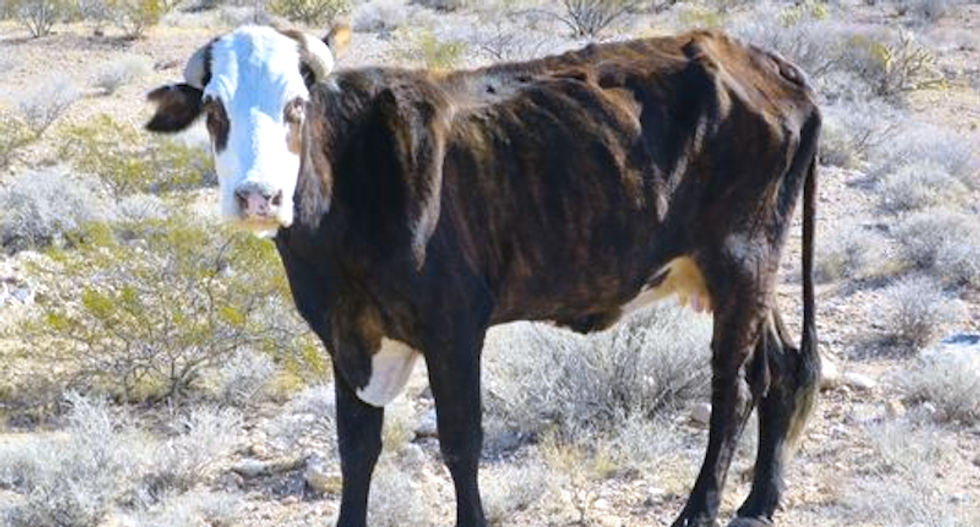 Cliven Bundy's cattle have decimated the public lands they share with an endangered tortoise, and now both the cows and the turtles may be starving.

The Nevada rancher and some of his sons have been jailed for their roles in armed standoffs with federal authorities two years ago at the family's Bunkerville ranch and earlier this year at an Oregon nature preserve.

A new report in the Reno Gazette-Journal shows Bundy's stubborn refusal to follow rules, and his lackadaisical ranching practices, have endangered his cattle and the land they roam unattended.

The elder Bundy has been embroiled for two decades in a dispute with the Bureau of Land Management, which administers federally owned land where he's grazed cattle for decades, and militia members and others came in April 2014 to threaten force to prevent authorities from rounding up his cattle.

The 69-year-old Bundy owes more than $1 million in unpaid grazing fees and fines dating back to the early 1990s, when the BLM ordered him to reduce his herd from 500 to 150 on public lands near Gold Butte.

He refused and stopped paying mandated fees to use the land -- and federal authorities say the herd may have doubled to more than 1,000 cows since then.

An online petition, which has gathered about 7,000 signatures so far, is asking federal and state governments to remove the animals before summer to prevent them from starving in the heat.

A senior scientist with the Center for Biological Diversity told the Gazette-Journal that Bundy had given up his grazing rights in 1993, when he stopped paying fees, and had simply let his cows loose to reproduce and overgraze the dry and fragile ecosystem.

“(The cattle) are there 24/7, 365 days (a year)," said Rob Mrowka, a scientist who posted the petition. "When the desert tortoises come out of their tunnels to forage in the spring, it’s been nibbled down.”

Ranchers typically rotate grazing areas to allow periods of rest for the land, but Bundy allowed his cattle to roam freely over the public lands -- even before his arrest.

“We have not received any substantiated reports of Cliven Bundy’s cattle starving on the Golden Butte allotment — though this may be true to some extent, as Cliven’s management practices leave a lot to be desired," said Flint Wright, of the Nevada Department of Agriculture.

A Nevada woman sued Bundy after she crashed into one of his cows two days after federal authorities backed down from the armed standoff to prevent bloodshed.

The 40-year-old woman suffered broken bones and other injuries April 14, 2014, after she and her boyfriend struck and killed one of five cattle owned by Bundy that were roaming on Interstate 15.

Bundy blamed the state, saying he wasn't responsible for the broken fence the cattle used to get onto the interstate.

Wright, the animal industry administrator, told the newspaper the cattle in Bundy's herd were considered feral and astray because they were in trespass and unbranded -- but he said the state needed a federal court order to round up the animals because they were trespassing on land overseen by the BLM.

A spokesman said the BLM was concerned about the cattle and their welfare, and had discussed the situation with the Humane Society.

But he said federal authorities were reluctant to take further action after Bundy and his supporters trained sniper rifles on them the last time they tried to round up the herd.

"Unfortunately, all previous attempts to remove Mr. Bundy’s trespass cattle from the public lands have been met with threats of violence and most recently with an armed assault on law enforcement officers," said Rudy Evenson, of BLM Nevada.

Sen. Harry Reid (D-NV) called for President Barack Obama to preserve Gold Butte while Bundy, who he described as an "outrageous lawbreaker," was jailed.

Mrowka, the Center for Biological Diversity scientist, said the state and federal governments had a "joint responsibility and possibly even legal obligations" to remove the possibly starving cattle to preserve the area for the endangered desert tortoise.

He wants the BLM to work with animal welfare organizations to rescue the abandoned cows and either turn them over to rescue groups or put down those that can't be saved.

Bundy, four of his sons and 14 other supporters have been charged for their roles in the Bunkerville standoff and the occupation of Malheur National Wildlife Preserve -- where militants desecrated Native American artifacts and filled a trench with human feces during their monthlong armed demonstration.

But their campaign to throw off federal oversight of public lands, which has been backed by Koch-funded lawmakers, continues.

Some ranchers in Utah say they should be allowed to graze cattle however and wherever they want -- just like Cliven Bundy.