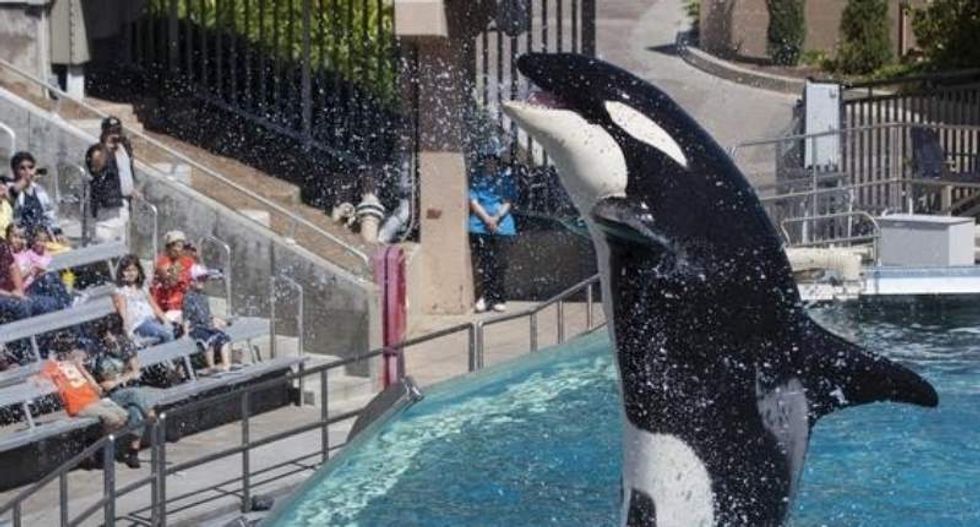 Visitors are greeted by an Orca killer whale as they attend a show featuring the whales during a visit to the animal theme park SeaWorld in San Diego, California on March 19, 2014. (Reuters/Mike Blake)

A member of the regulatory commission that controls coastal development in California was fined by the state's ethics watchdog on Thursday for voting on an expansion of SeaWorld's San Diego theme park while his wife owned stock in the company.

Gregory Cox, who is also a longtime member of the San Diego County Board of Supervisors, said in a statement Thursday he did not know that his wife had purchased 500 shares of SeaWorld stock in January of 2015 for her personal retirement account, according to the California Fair Political Practices Commission.

"When I discovered the purchase, the stock was sold and the facts were reported," Cox said. "Both my wife and I deeply regret the oversight."

About three months after Cheryl Cox bought the stock for $8,679, SeaWorld filed an application with the California Coastal Commission to expand a facility at which captive orcas, or killer whales, are held and shown to the public.

Cox introduced a motion to support the project with limitations on the number of orcas involved, voting ultimately to support an amended version calling for an end to SeaWorld's orca breeding program. On Thursday, the California Fair Political Practices Commission voted to fine him $3,000.

The SeaWorld shows, which the park has since said it would end along with its orca breeding program, have been controversial for years, with public opposition growing after the 2013 documentary "Blackfish" depicted the captivity and public exhibition of killer whales as inherently cruel.

The criticism intensified after three orcas died at SeaWorld San Antonio within a six-month span in 2015.

SeaWorld said last month that it would stop breeding killer whales in captivity, bowing to years of pressure from animal rights activists. The company has also said that it will phase out its signature "Shamu" killer whale shows in San Diego with modified presentations of the animals that focused on conservation.

Cox told the FPPC he discovered that his wife owned the stock in January while preparing his taxes and his annual disclosure of economic interests as a public official.

He asked her to sell the stock, and reported the conflict to the FPPC, documents show.

But the FPPC said Cox and his wife, a former mayor of the city of Chula Vista who sold her stock for about $9,593, were longtime elected officials who "had a high level of awareness" of conflict of interest laws.

Cox should have known that he had a conflict, the FPPC said.