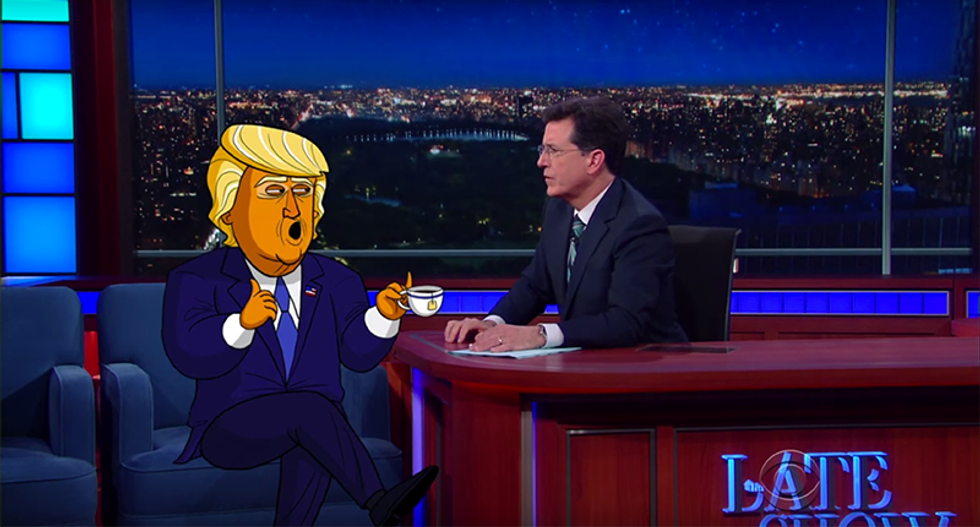 Donald Trump’s insults and outrageous behavior that have propelled him into the stratosphere of political polling — but Stephen Colbert said that’s not without its drawbacks on Tuesday's "Late Show."

The GOP establishment is disgusted by the idea of Trump representing their party. That's why The Donald hired lobbyist "and future Joe Pesci character," Paul Manafort, to help persuade the party power players that this racist, xenophobic, misogynist persona isn't real.

"He's just pretending to be an offensive loose cannon," Colbert said. "Just like the GOP will be pretending that they're happy he's the nominee. Now, this revelation raises some serious questions: Who is the real Donald Trump? Is he a cartoonish egomaniac? Or an entirely different kind of maniac?"

To answer those questions and more, Colbert welcomed Cartoon Donald Trump. Already in victory lap mode, Cartoon Trump claimed that he was taking over the GOP "knocking it down and putting up some condos."

Colbert got Trump to admit that the months of "brash, shoot-from-the-hip style" was indeed all an act. Cartoon Trump even admitted that his voice doesn't sound like that. He's actually a civilized posh man with a cup of tea in his coat pocket.

"Of course, it's an act," said Cartoon Trump. "Come on now, old bean. You didn't seriously think I believed what I was saying during this campaign? If so, you're even crazier than I've been pretending to be."

Trump continued that this is all part of what he calls "the long con" in large part because his show "The Apprentice" would never have worked if he was a polite, reasonable man. The show would have tanked "if my catchphrase would have been, 'I'm afraid we're going to have to let you go.'"

Cartoon Trump fully admitted that everything up until now was "a show. A charade. A bit of razzle-dazzle for the peasants in the cheap seats."

Colbert couldn't understand how Trump continued with this farce, but Cartoon Trump admitted that some things were true. "I actually do want to deport the Mexicans, and my penis is huge. It's the best. It's got a blue ribbon at my club's penis regatta." He then flawlessly illustrated his ability to turn the "Trumpiness" off and on at will. After all, according to Cartoon Trump he is "the greatest character actor of all time. Meryl Streep can kiss my ass!" Shifting back to his posh accent he assured he was joking, "love you Mer-bear."

But even this might not be Trump's final form. He says we'll have to wait and see.

Karl Rove is the latest Fox News personality to be "offended" after President Joe Biden decried white supremacy in his inauguration speech on Wednesday.

"Whether it's COVID, the economy or racism, why are they talking everything down?" Fox News host Bill Hemmer wondered during a segment with Rove on Thursday.

President Donald Trump's campaign committee is still active and soliciting funds. They ranked in millions in the final months following the November election, claiming that the donations would go toward the Georgia election and Trump's legal fees to overthrow the election. But Trump still has some hefty unpaid bills that some officials are attempting to recoup.

Minneapolis Mayor Jacob Frey told local KARE-11 News that the city is still owed hundreds of thousands of dollars for rallies that Trump held where he refused to pay for the security costs.

On CNN Thursday, anchor Poppy Harlow tried to nail down Rep. Carlos Giminez (R-FL) for his attempt to overturn the election results — even as he denied that was what he intended to do.

"You objected to Pennsylvania and Arizona, two states where the states' supreme courts said the processes in which the election had changed, right, because of COVID, were legitimate," said Harlow. "And they are the deciding bodies and all 50 states had certified the election results again, so I'm wondering why you did it. Did it not just help promote the big lie that Biden didn't legitimately win?"