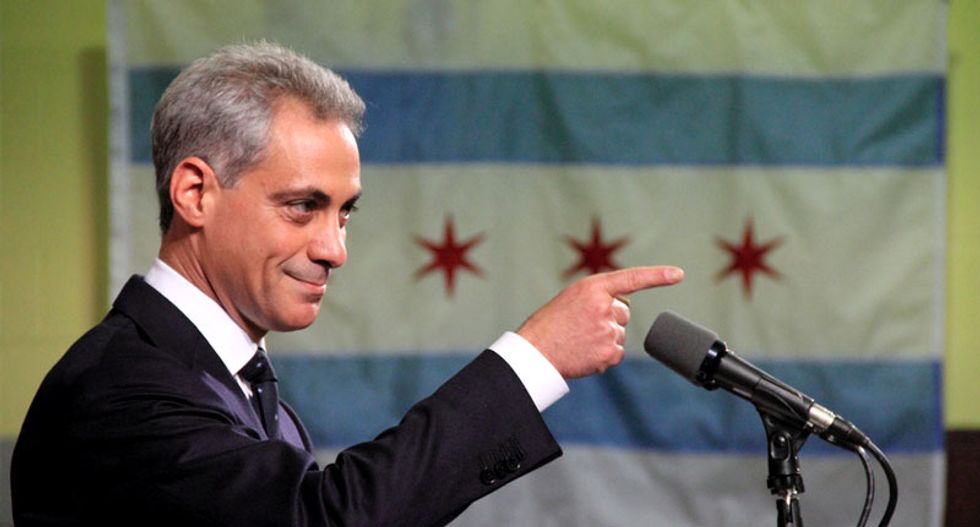 Mayor Rahm Emanuel has faced criticism for the way the city handled the murder of citizens at the hands of Chicago police. Protesters from the #BlackLivesMatter movement have staged protests at City Hall for the last year, but it seems while doing so, they were under surveillance by Emanuel's staff as well as undercover police, according to records obtained by the Chicago Sun-Times.

Documents show that the police were already monitoring social media posts from activists during the protests in Ferguson, Missouri after the police shooting death of Michael Brown. However, Ralph Price, the police department’s top lawyer, approved a plan last October for undercover police to “monitor” meetings of Black Lives Matter activists, as well as churches and philanthropic organizations.

Black Youth Project 100 was one of the groups being spied on. After the video footage of the police shooting death of Laquan McDonald was being released, a top Emanuel aide was at the command center of the city’s Office of Emergency Management and Communications asking about the organization and its activity.

Emanuel's deputy chief of staff Joe Deal sent information from public safety officials to Emanuel's chief of staff Eileen Mitchell and the press staff according to emails released in a data dump late December. The first was at 6:22 p.m. and also copied chief of staff Mitchell, Guglielmi and others, including one of Emanuel's biggest campaign donors Michael Sacks, who is the chairman of the investment firm GCM Grosvenor.

“I will be at OEMC this evening and will report any significant activity,” he wrote. In emails that followed, he reported on the location and size of the protest groups marching. When protesters had a minor skirmish with police, Deal reported the details to the group.

This is the seventh investigation the police department has opened since 2009 monitoring activist groups known for protesting. When officers are investigating groups they're required to fill out a “First Amendment Worksheet” detailing the information they're seeking to gather. The information should all fall under a “reasonable law enforcement purpose.” The questionable words being "reasonable."

“I always operate under the assumption that someone is looking at us,” says DeAngelo Bester, co-executive director of the Workers Center for Racial Justice. His group was one of those one targeted by police last fall despite the fact that their focus is on jobs in the community. He continues that it is "ridiculous" and wasteful for police to spend their resources on protesters that are known for being law-abiding.

“The Chicago Police Department and Emanuel administration try to justify the harsh treatment [by cops] in black communities by saying there’s so much violence,” he explained. “Meanwhile, they’re spending the time and resources to surveil groups exercising their First Amendment rights.”

Similarly, the Black Youth Project 100 doesn't know why they're being targeted. “There’s just a history of knowing we are organizing in a very hostile environment,” says the group's Chicago leader Johnae Strong. “The Chicago Police Department does exactly what it wants to do and finds ways to make it bureaucratically valid.”

When asked to respond to the spy operation, police spokesman Anthony Guglielmi maintained that the investigation was “routine,” legal and “documented to ensure transparency with the public.”

“These protective actions — which happen in limited circumstances — are conducted to protect public safety and people’s First Amendment rights,” he concluded.