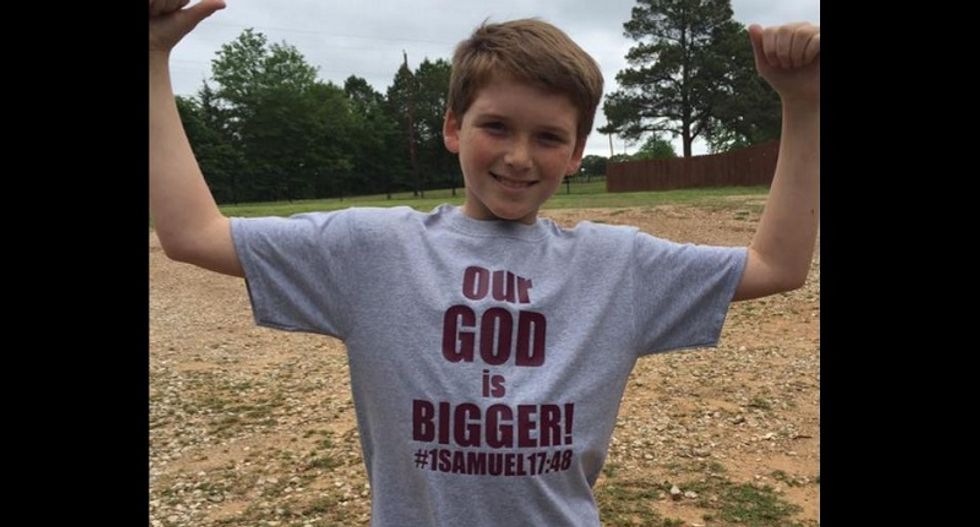 Texas parents are upset that a public school district has taken a Bible verse off its website after atheists complained, according to the Tyler Morning Telegraph.

Troup Independent School District had the biblical phrase, "As Goliath moved closer to attack, David quickly ran out to meet him," from the Old Testament, on their website until the Freedom From Religion Foundation sent a letter complaining it violates the Constitution by promoting Christianity.

In response, Christian parents created T-shirts that say, "Our God is bigger."

Parent Cindy Carnes is selling them for $7 each.

"I know that lots of hands are tied, but as parents and students our hands are not," she wrote on Facebook. "We can take something that was meant to stand against God and use it for His glory by getting our kids involved in taking a stand for God and exercising our freedom to actively praise and worship Him."

The FFRF says they are missing the point, according to the Telegraph.

"Under the federal constitution, a government entity like a school district can't endorse one religious belief over others or religion generally over non religion," Sam Grover, FFRF attorney told the paper."